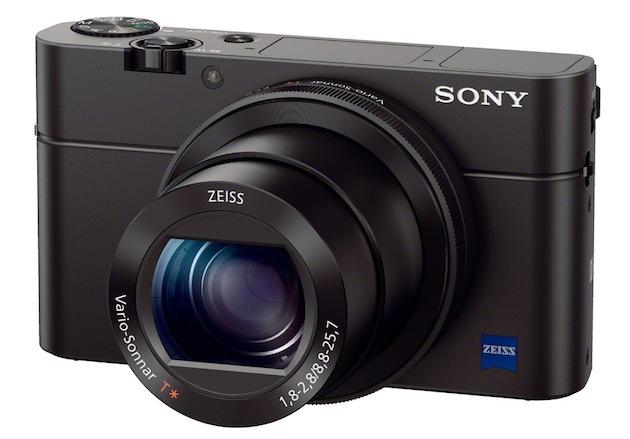 Even though Sony has been suffering from financial woes of late, the Japanese company did find some form of success recently thanks to new Xperia smartphones and the PlayStation 4. And let's not forget another meaningful part of its electronics business: cameras. With the introduction of the Cyber-shot RX100 back in 2012, Sony made a point-and-shoot that most any photography buff could proudly carry around, to use not only as a backup to, say, a DSLR, but even as a main camera. Now, looking to build on the success of the first and second generations, Sony is announcing the RX100 III, bringing with it more bells and whistles than you could ever hope for out of a compact shooter.

On the outside, the new RX100 is quite similar to its predecessors, sporting a sleek, slightly glossy black finish; there's also a 180-degree tilting LCD on the back, something that has come a long way since the fixed screen on the original camera. It is the inside where most changes have taken place, however. For instance, it now features Sony's Bionz X image processor (also found on the recently unveiled Alpha A77 II), which is paired alongside the same 20.1-megapixel Exmor R CMOS sensor that's found on the previous version of the RX100. But while Sony didn't make any upgrades to the sensor here, the RX100 III does welcome brand new Zeiss glass in the Vario-Sonnar T*, a 24-70mm, f/1.8-f/2.8 lens -- Sony says this is perfect for keeping a wide-angle view and should help you take some solid, bokeh-filled pictures. One of the many things the RX100 does well is video, and Sony wanted that trend to continue with its third-gen model. The pocket-sized shooter now processes video in XAVC S format, which, according to Sony, lets you record 1080p videos at a much faster data rate and with very little compression -- in other words, this will make your movies look a lot better and crisper. To go with that, Sony also added a built-in, retractable OLED electronic viewfinder (which wasn't present on either of the older editions), WiFi/NFC for wireless sharing and the ability to capture 4K still images, making the newest RX100 an even more powerful little camera.

So just how much will you have to pay for all these features? Well, Sony's pricing the Cyber-shot RX100 III at a reasonable $800 when it arrives next month, which is only $50 more than the RX100 II was when it became available last year.

In this article: Cyber-shot, hands-on, point-and-shoot, RX100, RX100 III, RX100II, RX100III, Sony, SonyRX100, SonyRX100III
All products recommended by Engadget are selected by our editorial team, independent of our parent company. Some of our stories include affiliate links. If you buy something through one of these links, we may earn an affiliate commission.