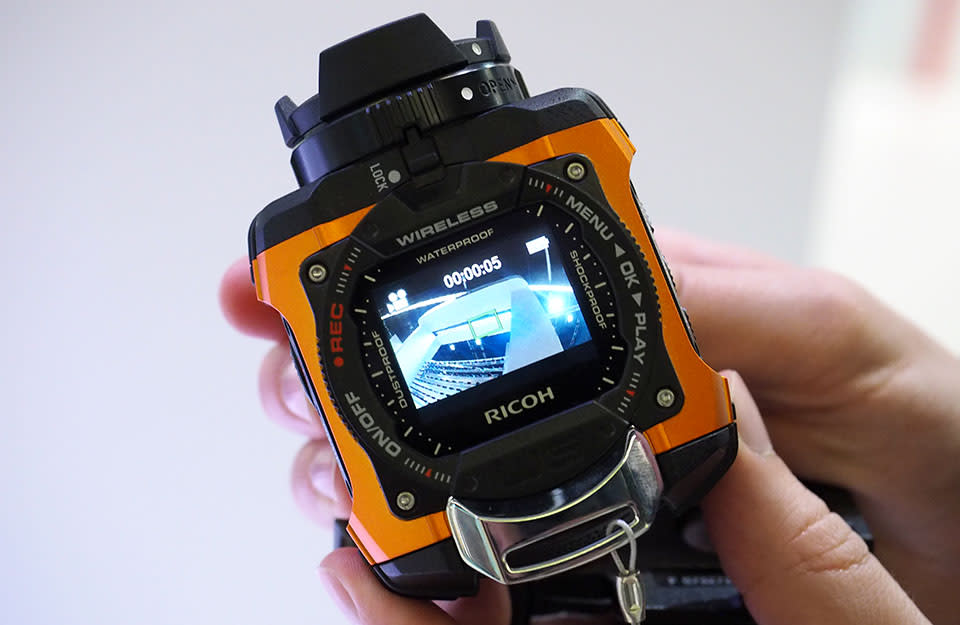 When you're in the market for an action camera, we'd imagine GoPro or Contour would be the first names that sprang to mind. Ricoh is hoping to crowbar itself onto your psychological roster, however, with the WG-M1, its latest ruggedized action camera. Looking more like the sort of spy compass you'd get for free on the front of a magazine, the hockey puck-style device offers a 14-megapixel CMOS sensor and a six-element lens with an f/2.8 aperture. That'll be good enough for 1080p video of you on your longboard hurtling through traffic at 30 miles an hour. Holding it in the hand is an odd experience, thanks to the fact that the 1.5-inch LCD display is embedded in the "top" of the unit, so holding it requires a claw-like grip. Of course, it's not really meant to be used as a traditional stills camera (although it can take 10-megapixel snaps), but as a video unit for extreme, sorry, EXXTREEEME environments. That's why the field-of-view while taking video is an impressive 137 degrees, although that'll increase to 160 degrees for stills.

Of course, everyone's more concerned with how this device behaves out on the various slopes and tracks that you'll be doing your sports upon. Certainly, the reinforced polycarbonate (with aluminum accents) feels sturdy, if a little immature, and we have no reason to doubt the company's belief that it'd keep working in 10 meters of water, from drops of two meters and at degrees that are 10 below zero (Celsius). We're also glad that the WG-M1 comes with 100MB of built-in memory, which at least puts it above the GoPros, which won't even take a single test image without you first supplying an SD card. If that's enough to tempt you, then the unit will be landing in stores at some point next month, which should give you time enough to work out if the odd-shaped unit is worth spending some time with.

In this article: Action Camera, GoPro, hands-on, Pentax, Photokina, Photokina2014, Ricoh, Rugged, WG-M1
All products recommended by Engadget are selected by our editorial team, independent of our parent company. Some of our stories include affiliate links. If you buy something through one of these links, we may earn an affiliate commission.