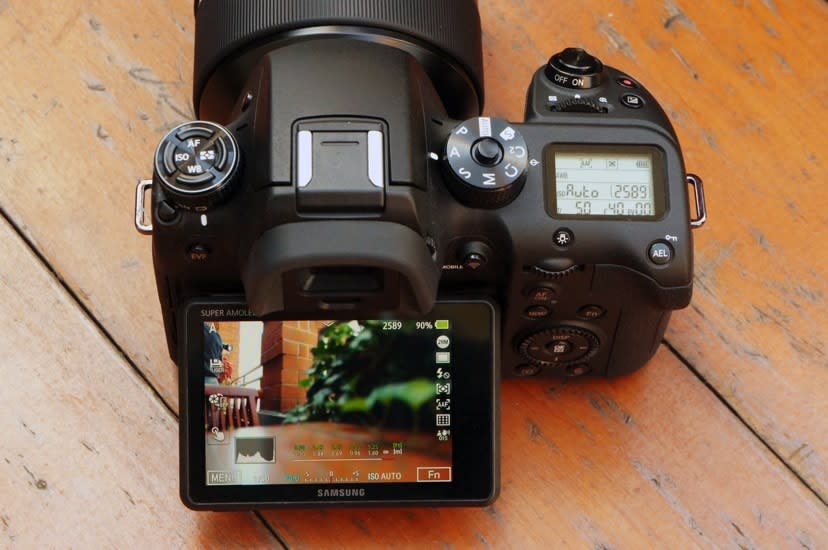 This week marks the start of Photokina, the camera show where pretty much every brand will unveil their latest and greatest pieces of kit. We'll hear from everybody in due time but right now, Samsung is in the hot seat. The tech giant just unveiled the NX1, the company's first camera that records 4K video. In addition to doing UHD footage at 30 or 24 frames per second and Cinema 4K at 24fps, it shoots stills with a 28.2-megapixel backside-illuminated APS-C CMOS sensor. In burst-capture mode, you can snap up to 15 frames per second at full resolution. ISO sensitivity now ranges from 100 to 51,200. Similar to the NX30, a more mid-range camera in Samsung's lineup, this has WiFi and NFC, along with a 3-inch Super AMOLED articulating display and a 1,366 x 768 electronic viewfinder. In this case, though, it's 802.11ac WiFi, there's Bluetooth too, and the EVF promises a shorter lag time of around 5ms.

Under the hood, the NX1 makes use of a new auto-focusing system with 205 Phase Detect points, which Samsung says cover 90 percent of the frame. It's those focusing points pros will care about most, though Samsung also tweaked its algorithms to better predict where a subject is going to move. The AF assist light also has an improved reach -- up to 15 meters. As for the body, it's a magnesium-alloy affair -- both dust- and water-resistant -- with an LCD status display on top, next to the mode dial.

The NX1 arrives in mid-October, priced at $1,499 for the body only. In addition, Samsung will sell a new 50-150mm with f/2.8 aperture through the entire zoom range. In addition, it brings four-axis optical image stabilization and the ability to limit focus to a custom range. So far, Samsung has declined to say whether its other cameras will get a firmware update to support this new lens and its custom-focus feature, though the company does have a pretty good history of providing software updates to older models. That will arrive next month too, at a cost of $1,599. There will also be an optional battery grip, which packs a 1,900mAh cell (about the same size as on the main camera), and which should give you an extra 500 shots, give or take.

8
In this article: ILC, ILC camera, IlcCamera, nx1, photokina, photokina2014, samsung, samsung nx1, samsungnx1
All products recommended by Engadget are selected by our editorial team, independent of our parent company. Some of our stories include affiliate links. If you buy something through one of these links, we may earn an affiliate commission.