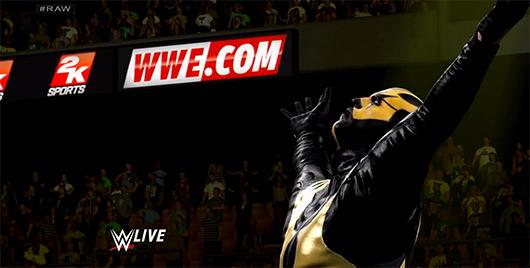 WWE 2K15 has been delayed to November 18 in North America on PlayStation 4 and Xbox One, 2K announced today. The international release of the game on the next-gen systems has also been pushed back to November 21. The PlayStation 3 and Xbox 360 versions of the game will still arrive on October 28 in North America and October 31 internationally, as originally announced in May.

New York, NY – September 16, 2014 – 2K today announced a new next-gen console release date for WWE® 2K15 of November 18, 2014 in North America and November 21, 2014 internationally for the PlayStation®4 Computer Entertainment System and Xbox One, the all-in-one games and entertainment system from Microsoft. Releases for the PlayStation®3 and Xbox 360 will launch as planned on October 28, 2014 in North America and October 31, 2014 internationally.

"Visual Concepts and Yuke's are committed to delivering the most authentic and action-packed WWE experience to date, including release for the very first time on next-generation consoles," said Greg Thomas, President, Visual Concepts. "The additional development time enables our talented teams to ensure the WWE 2K15 next-gen experience fully meets our expectations."

Developed collaboratively by Yukes and Visual Concepts, a 2K studio, WWE 2K15 is rated T for Teen by the ESRB. For more information on WWE 2K15 and 2K, visit wwe.2k.com, become a fan on Facebook, follow the game on Twitter using the hashtags #WWE2K15 and #FEELIT or subscribe to WWE 2K on YouTube.

All trademarks and copyrights contained herein are the property of their respective holders.
In this article: 2k, 2K-Sports, delay, delayed, microsoft, next-gen, playstation, ps4, Visual-Concepts, wrestling, wwe, wwe-2k, wwe-2k15, xbox-one, Yukes
All products recommended by Engadget are selected by our editorial team, independent of our parent company. Some of our stories include affiliate links. If you buy something through one of these links, we may earn an affiliate commission.