Supposed new iPhone casings show up with tall body, tiny dock connector, tons of mystery (update: a bit of the front too) 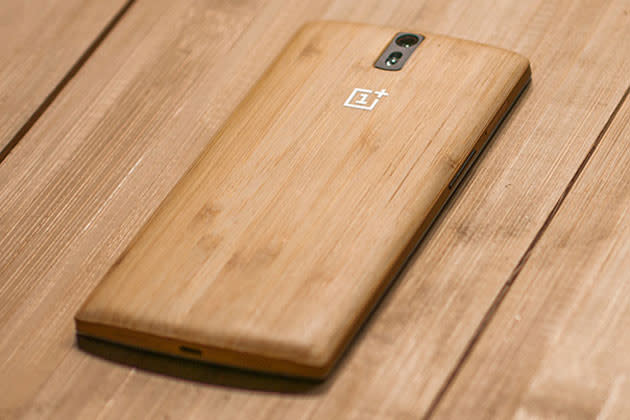 Although more people have been able to get their hands the OnePlus One than ever before, new handset owners won't be able to accessorize them as thoroughly as was first thought. After two months of teasing its bamboo, silk white and sandstone black "StyleSwap" covers, the company has been forced to kill its custom backplates before they got the chance to go on sale. According to a company blog post, "technical difficulties" during mass production meant that covers suffered from creaks or became slightly loose, risking damage to the non-removable battery that it was meant to protect.

Mirroring its catchphrase, OnePlus says it didn't settle, but instead arrived at a "complicated decision." If you were dead set on getting a bamboo cover for your One, the company has some good news -- a "small number" of wooden backplates did pass the grade, and they'll soon go up on its online store. The company is also exploring the idea of outfitting special limited edition handsets with kevlar or denim, but says it'll put everything it's learned into practice for the eventual launch of the OnePlus 2.

In this article: backplate, cover, oneplus, oneplus one, styleswap
All products recommended by Engadget are selected by our editorial team, independent of our parent company. Some of our stories include affiliate links. If you buy something through one of these links, we may earn an affiliate commission.