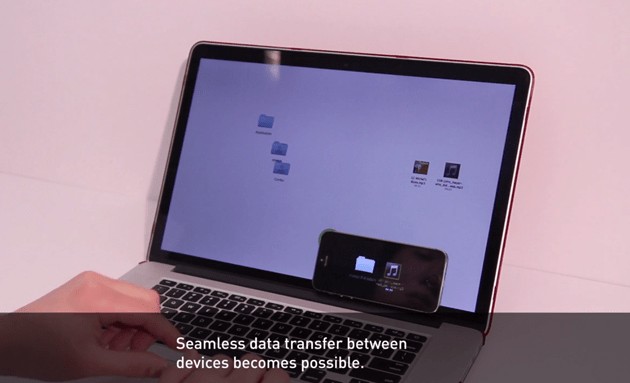 Sure, we've seen apps that let you easily share files between your phone and PC. No biggie there. But the demo we're about to show you is a tad more sophisticated than that. Over at MIT, two teams of researchers have developed a smartphone system called THAW, which allows you to share files and use the phone as a game controller -- all by pressing the handset against your computer's display. As you can see in the below demo video, for instance, it's possible to transfer files onto the phone simply by dragging them where the phone is, as if it were just another folder on your desktop. Similar to what you can already do with NFC, you can press the phone against the screen, and walk away with whatever web page you had been looking at. (To be fair, iOS 8's Continuity feature does that automatically.)

Most interesting of all, perhaps, are the implications for gaming. Indeed, the researchers' nearly four-minute video spends more time on desktop games than any other use case. For starters, the phone can act as a boundary for something in the game -- the equivalent of a wall, or a rock, that a character has to jump over. Additionally, the handset can become a "container" (for lack of a better word), which you can use to carry a character or object out of the game, and then redeposit them somewhere else on the screen. Alternatively, by holding the phone over the display while a game is in progress, you can alter the behavior of a game -- maybe that Guillotine of Doom moves a bit slower when the phone is there.

Throughout, the phone never obscures what's on the screen; it actually reflects it, as if the entire phone were a see-through piece of glass. The trick: Your phone's rear camera captures imagery on the computer, while additional software processing on the handset allows you to manipulate objects from your handheld device. As always with prototypes, there's no guarantee if or when this will come to market. As MIT describes it, though, it seems this could work on any handset with a rear camera and possibly an accelerometer. In other words, any modern smartphone.

In this article: fluid interface group, fluidinterfacegroup, MIT, mobilepostcross, research, tangible media group, tangiblemediagroup
All products recommended by Engadget are selected by our editorial team, independent of our parent company. Some of our stories include affiliate links. If you buy something through one of these links, we may earn an affiliate commission.