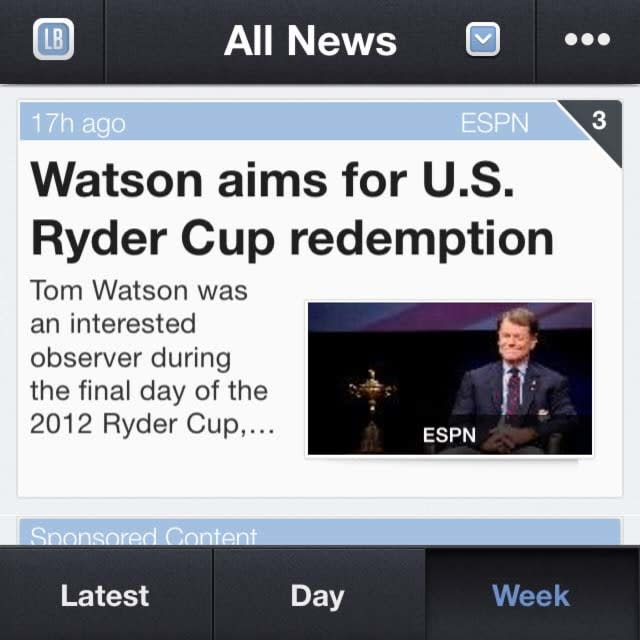 Over the last twenty-five years the Ryder Cup has become a major sporting event. The biennial competition between golfers from the United States and players from Great Britain and continental Europe draws huge crowds and television ratings. Now you can follow this years battle that takes place next week in Scotland with the Sportfusion-Unofficial 2014 Ryder Cup News Edition. The universal app requires iOS 6.0.

The app doesn't carry official Ryder Cup status. However, it still provides lots of information for interested golfers. You will find a link to the official Ryder Cup web site so you can track the scores of the matches once they tee off beginning next Friday at Gleneagles in Scotland. Additionally Sportfusion-Unofficial 2014 Ryder Cup News Edition offers access to news updates and stories about the competition, the golfers, the Gleneagles course, the team captains, and more. Users can choose whether they want the latest news, or news from the last 24 hours or the last week. All these stories can be sent to you by setting up a push notification on the app.

The news stories shown to users are pulled from other sites so you will receive plenty of information. If a story was written about the Ryder Cup or any of the participants you should be able to see it in the app. Now with all those stories available it might be a bit overwhelming but Sportsfusion-Unofficial 2014 Ryder Cup News Edition allows you to choose your favorite topics so you receive just stories from those areas. You also can choose to eliminate certain topics so stories from those areas are eliminated and you don't see them even in the general news summaries. Sportfusion-Unofficial 2014 Ryder Cup News Edition makes it simple for users to share their favorite stories with friends through a variety of social media sites. Users can also upload their own comments to the app for others to read.

The app provides a single place to find all of the stories leading up to the matches and the scores once the competition begins. However, the app has a short life time. Once the competition ends and the post match analysis is completed the Ryder Cup goes on its normal two year hiatus. You will find some stories in the interim, but not many. So grab it and use it now.

I searched iTunes and did not find any other apps dedicated to the Ryder Cup. So even though Sportfusion-Unofficial 2014 Ryder Cup News Edition doesn't carry the official Ryder Cup approval it does a good job of keeping users informed and up to date with Ryder Cup information.

In this article: golf, iOS, review, Ryder Cup, Sportfusion
All products recommended by Engadget are selected by our editorial team, independent of our parent company. Some of our stories include affiliate links. If you buy something through one of these links, we may earn an affiliate commission.