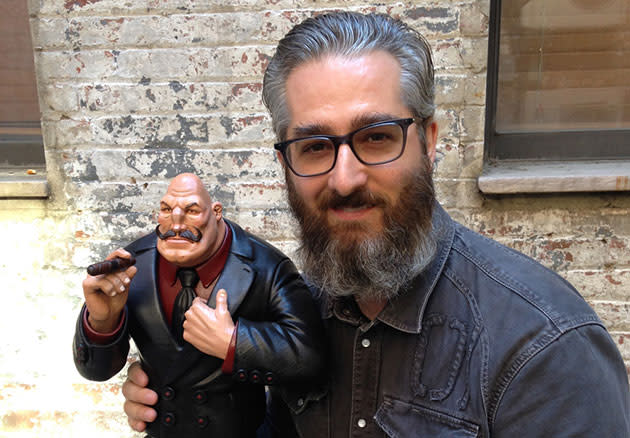 When MakerBot announced that Bre Pettis would be stepping down as CEO earlier this month, we knew he wasn't going far. Today, the 3D printing guru's new project was revealed. The Pettis-led Innovation Workshop at Stratasys is called Bold Machines, and it looks to push "the frontier of 3D printing technology." Leveraging Solidscape 3D printers and devices both of the aforementioned outfits, the studio will work alongside "innovators" to flex its muscle. So, what's on tap to start? A movie made entirely with 3D-printed characters. The film focuses on Margo, a detective whose parents have gone missing during a space exploring expedition, and a businessman's evil schemes. In fact, you can go ahead and print your own Margot figure now, and production files for other characters, including the sinister Mr. Walthersnap (pictured with Pettis above), will be made available for at-home printing in the future.

In this article: 3dprinting, boldmachines, brepettis, makerbot, margot, stratasys
All products recommended by Engadget are selected by our editorial team, independent of our parent company. Some of our stories include affiliate links. If you buy something through one of these links, we may earn an affiliate commission.