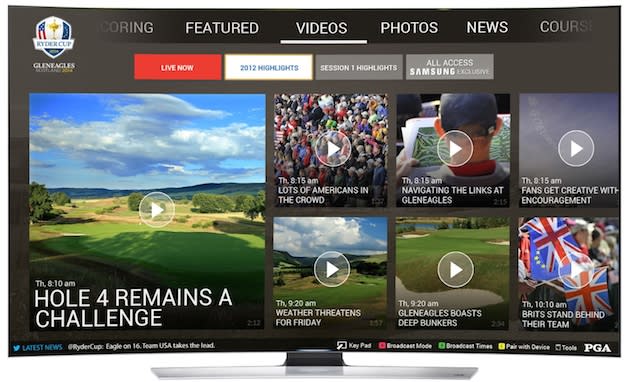 This year's Ryder Cup won't have Tiger Woods representing the US, although some people argue that this isn't necessarily a bad thing. Regardless, the tournament, which begins today, must go on. To make the experience better for golf enthusiasts, Samsung has teamed up with the PGA and Turner Sports to release a Ryder Cup app for its smart TVs, allowing viewers to switch between live video feeds (provided by NBC and the Golf Channel), see an up-to-the-minute leaderboard right on the screen and easily keep up with either Team USA or the European Team.

There are also second-screen features in tow, thanks to a companion Android app that lets users do things like watch different streams on their smartphone or tablet. The Ryder Cup application is friendly with most 2013 and 2014 models of Samsung's smart televisions, and it will continue to work even after the tournament ends on September 28th. Which is to say, you can keep watching highlights over and over, as is the case with the PGA Championship app the company released last month.

In this article: Golf, Golfer, hdpostcross, Ryder Cup, Ryder Cup App, Smart TV, Smart TVs, SmartTV, Sports
All products recommended by Engadget are selected by our editorial team, independent of our parent company. Some of our stories include affiliate links. If you buy something through one of these links, we may earn an affiliate commission.