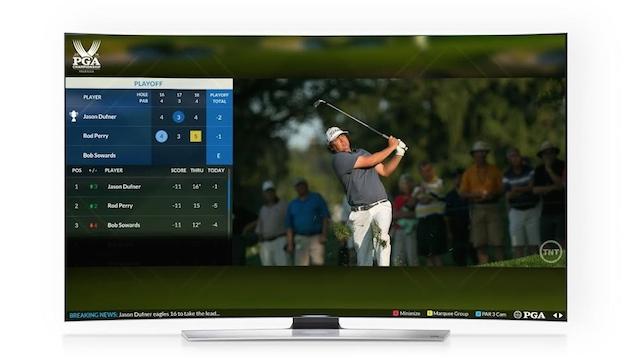 While a lot of people in the US are getting ready for the NFL regular season to start, there are indeed other sports out there. Which is to say, the other football, basketball, baseball and, well, you get the point. For golf fans, these next few days will be rather interesting, with the PGA Championship due to begin on Thursday, August 5th. Naturally, Samsung saw an opportunity and found a way to help golfers who won't be there to experience it live, by introducing a smart TV app filled with content from the tournament -- the only caveat is you'll have to own one of the company's 2013 or 2014 sets. Aside from that, there will be a ton of stuff for you to enjoy, including different broadcast modes (from CBS and TNT); a second-screen feature that can display leaderboards and highlights on an Android device; and live voting for different things during the PGA event. Once the Championship is over, Turner Sports, a Samsung partner on the launch, tells us the smart TV app is expected to have the same features for the Ryder Cup, which tees off on September 23rd.

In this article: Golf, hdpostcross, PGA, PGA Championship, Samsung, Smart TV, Smart TVs, SmartTV, SmartTVs, Sports, TurnerSports
All products recommended by Engadget are selected by our editorial team, independent of our parent company. Some of our stories include affiliate links. If you buy something through one of these links, we may earn an affiliate commission.