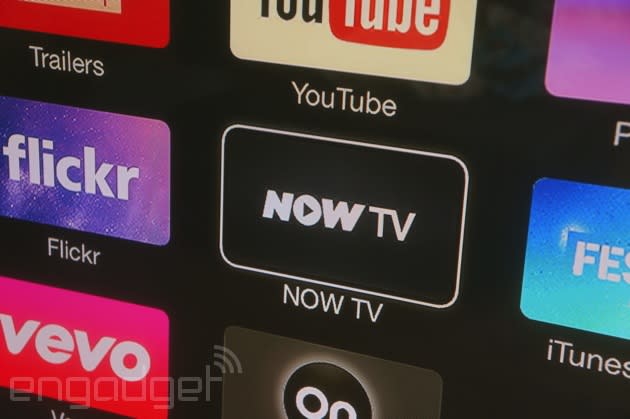 Sky's Now TV streaming service has offered an iOS app for the longest time, but when it came to Apple TV, the company only let subscribers enjoy sport on the big screen. As of today, that's no longer the case, because Sky's brought its Entertainment and Movies packages to the streamer, just a couple of weeks before prices are set to rise. If you're already a subscriber, the menus feature the same New In, Most Popular and Must See categories, which have been given a flatter look to fit in with the Apple TV's new iOS 8 UI. Sky's recent rush of updates means you can also now stream via the Xbox One, PlayStation 4 and Google's Chromecast, as well as its own £10 set-top box.

In this article: apple, apple tv, bskyb, entertain, hdpostcross, ios 8, movies, now tv, sky, uk-feature
All products recommended by Engadget are selected by our editorial team, independent of our parent company. Some of our stories include affiliate links. If you buy something through one of these links, we may earn an affiliate commission.