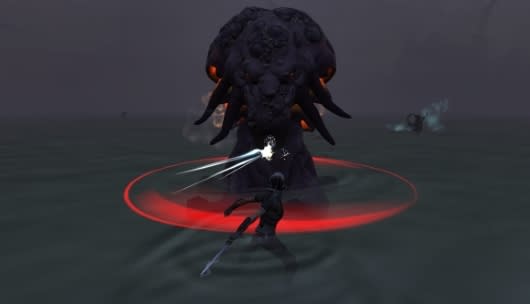 MJ and I were talking while playing The Secret World the other day about the game's legendary fight length. Well, at least I consider fights in this MMO as taking longer than normal. I told her that generally if a standard, level-even mob isn't dead by a rotation-and-a-half of my skills, or about eight button presses, then it begins to irk me.

Now it definitely depends on the mob strength and situation, but I don't want to be pounding 30 keys and sitting there for two minutes before a critter drops. However, saying that got me wondering what you all consider as a normal, acceptable number of button presses (or skills used) per fight. What do you think?

Every morning, the Massively bloggers probe the minds of their readers with deep, thought-provoking questions about that most serious of topics: massively online gaming. We crave your opinions, so grab your caffeinated beverage of choice and chime in on today's Daily Grind!
In this article: button-presses, buttons, combat, combat-length, daily-grind, opinion, skill, skill-use, skills, tdg, the-daily-grind, time-to-kill, ttk
All products recommended by Engadget are selected by our editorial team, independent of our parent company. Some of our stories include affiliate links. If you buy something through one of these links, we may earn an affiliate commission.