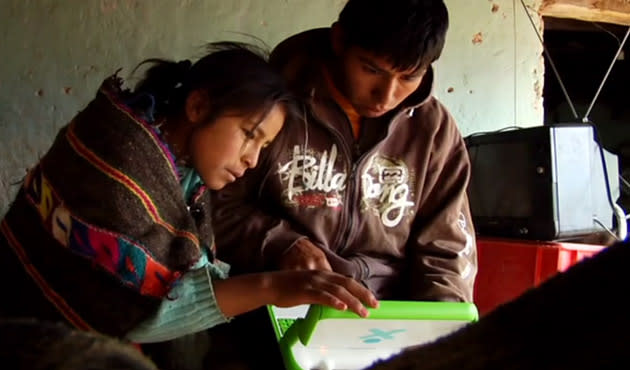 The staff changes, massive layoffs and the shutdown of its entire Boston office over the years make the One Laptop Per Child program sound like a huge failure. But this documentary by filmmaker Michael Kleiman shows that OLPC really did change some of its recipients' lives, particularly those who've never heard of computers and the internet before the organization gave them laptops of their own. The documentary, called WEB, looks at the OLPC rollout in the poor areas of Peru, showing kids typing on their small laptops in dingy classrooms and teaching their parents how to use Google underneath trees. It's been shown in several film festivals before, but it's now available for download from iTunes, Google Play, Amazon Instant Video, Xbox Video, Sony Entertainment Network and Vudu.

Since it's not all sunshine and roses for OLPC as we mentioned earlier, the documentary also details the challenges the organization had to overcome, along with interviews of several tech bigwigs, including Father of the internet Vince Cerf and OLPC founder Nicholas Negroponte. If you've forgotten OLPC's original purpose (before it went into the tablet business, that is), it's a project that aims to provide children in developing countries with laptops of their own. To make that happen, though, it relies on the generosity of people with money to spare, asking them to pay $399 to get one of its laptops and donate another to a kid in the developing world at the same time.

In this article: documentary, OLPC, video
All products recommended by Engadget are selected by our editorial team, independent of our parent company. Some of our stories include affiliate links. If you buy something through one of these links, we may earn an affiliate commission.