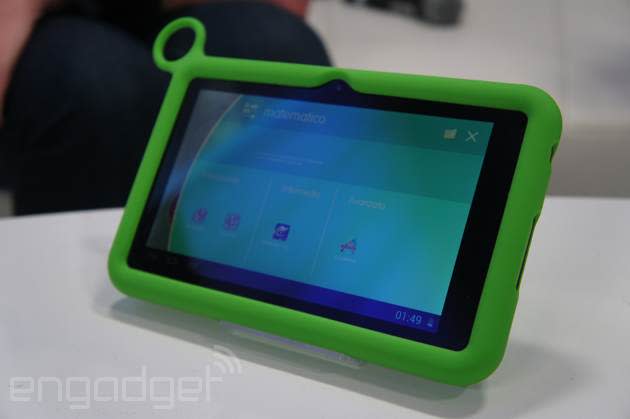 OLPC's Giulia D'Amico swung by our CES stage a little while ago with the organization's two new tablets in tow - so, naturally, we kindly asked her to stay behind a while, so we could spend a little quality time with the devices. The 7-inch XO-2 looks nearly identical to its predecessor, the company's first-ever consumer-facing device. It's still a bit chunky and the rear has that same plasticky dimpled design. There's also that great Yves Béhar-designed silicone slipcase. The really significant changes are all inside the slate, including a quad-core processor, 1GB of RAM, 8GB of stage and built-in GPS and Bluetooth. The custom Android software will remain largely the same, as well (built this time on top of KitKat), though the company is added more content to its offering.

The 10.1-inch XO-10, meanwhile, shares most of the same internals as its little brother, but brings a truly sleek industrial design that puts the little one to shame. There's a green metal back (the final color has yet to be determined, though we like the fact that it matches the company's other offerings) and a much slimmer profile. Of course, the thinner design calls into question just how rugged the bigger model will ultimately be. 12
In this article: ces2014, hands-on, olpc, tablet, xo-10, xo-2
All products recommended by Engadget are selected by our editorial team, independent of our parent company. Some of our stories include affiliate links. If you buy something through one of these links, we may earn an affiliate commission.