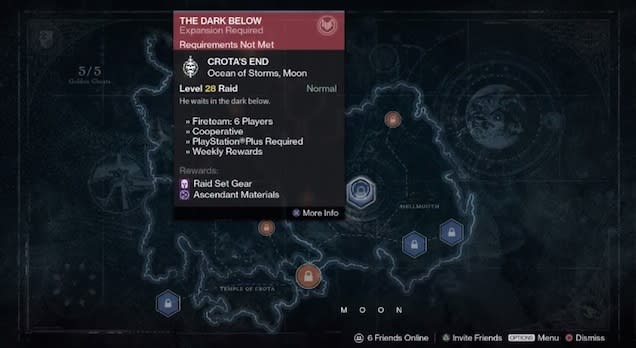 Missions, strikes and raids, oh my! A bug in Destiny has reportedly leaked the names and locations of several pieces of content set to arrive with the expansions for Bungie's sci-fi shooter, the first of which is due in December. According to a YouTube video posted by "Scott M" (who is not the original owner of the video), the expansions will collectively introduce at least two raids and four strike missions. Other, more spoiler-y info ahead.

We already knew that Destiny's expansions - The Dark Below and House of Wolves - would introduce new content, but thanks to the YouTube video from Scott M (which you can watch after the break), we have a clearer idea of what to expect. For example, while the latter half of Destiny revolves around finding and destroying something called The Black Garden, a strike mission that appears to be associated with the The Dark Below expansion suggests that the Guardians' enemies are working hard to resurrect it. A raid for that expansion, titled "Crota's End," suggests there is yet more to discover under the moon's surface.

Descriptions for House of Wolves content seems incomplete, though. When highlighted in-game, a raid mission apparently tied to the second expansion simply reads, "Reef Raid Description." That's at least better than the House of Wolves strike mission on the moon, which reads, "moon_portal_1." But then, Destiny hasn't really been known for having stellar dialogue.

[Image: Activision]
In this article: activision, bungie, destiny, expansion, house-of-wolves, leak, microsoft, playstation, ps3, ps4, report, the-dark-below, xbox, xbox-one
All products recommended by Engadget are selected by our editorial team, independent of our parent company. Some of our stories include affiliate links. If you buy something through one of these links, we may earn an affiliate commission.