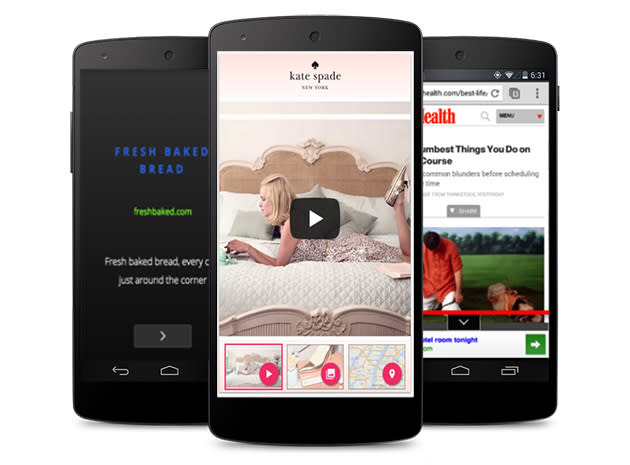 Advertisers aren't always a fan of investing in mobile. Part of that reason is that the ads you see on phones and tablets don't command the same amount of attention that ads do on desktops. Google is working on new ad units though that could lure in the big brands, though users might find them somewhat infuriating. Of the four new designs, three are fullscreen ads and some are interstitial ads that would take over the screen at a "logical break point" while you're using an app. These ads could even include video or interactive elements, which pretty much turns them into in-app commercials. So, between levels three and four of the next Angry Birds licensing debacle title you could be watching a 20 second ad for Perdue chicken breasts. Or, you could just be blindly skipping by the ads that hijack your screen to sell paper towels, skin cream, or anything else.

Update: And lest you think Google is about to single-handedly destroy the mobile app landscape, this is pretty similar to an initiative launched by Apple recently.

In this article: admob, ads, advertising, adwords, google, mobilepostcross
All products recommended by Engadget are selected by our editorial team, independent of our parent company. Some of our stories include affiliate links. If you buy something through one of these links, we may earn an affiliate commission.