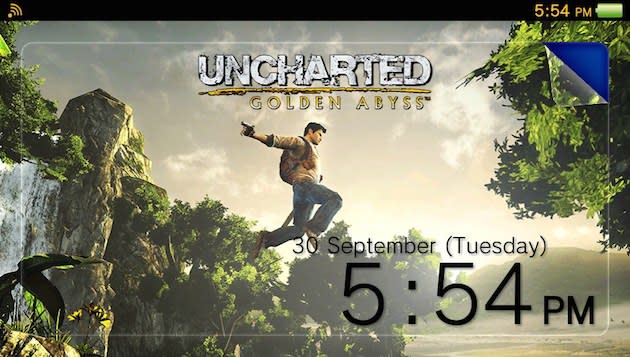 Sure, you've been able to change the background on your PS Vita since day one, but swapping out the system's application icons wasn't exactly an option. Until now, that is. With the latest update to Sony's handheld, the custom themes that the catch-up king promised last month will soon be available. With software version 3.30 comes not only different icons for system settings and the like, but also new background music too, should you still have that turned on. Aside from Uncharted and Tearaway interface skins, the PlayStation Blog notes that not-game tie-in appearance packs themed around the four seasons and arts-and-crafts will be available too. Much like the trophy-rarity ratings coming to the portable with the patch (something the PlayStation 4 has had since launch), this is likely an appreciated gesture. However, we know there's probably at least a few amongst the PS4's 10 million owners who'd like to see their console look a little less blue sooner rather than later. In this article: customtheme, gaming, hd, hdpostcross, PlayStation, psvita, sony, update
All products recommended by Engadget are selected by our editorial team, independent of our parent company. Some of our stories include affiliate links. If you buy something through one of these links, we may earn an affiliate commission.