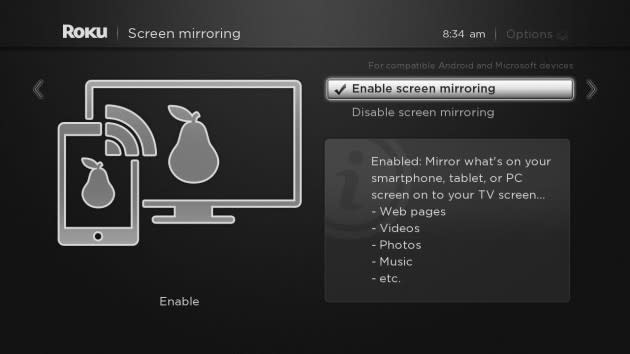 Roku has unveiled its latest shot in the increasingly-crowded set-top box wars: screen mirroring. Even Microsoft and Firefox OS are lining up to challenge Google's Chromecast and Apple's AirPlay, so Roku had to compete somehow. Launching in beta, Roku's version of the tech works from (some) Android, Windows Phone and Windows 8.1 devices, and broadcasts to Roku 3 or the Roku Streaming Stick. There's no mention of the word 'Miracast' but that appears to be the tech in use. If your Roku has the latest update (rolling out over the next few weeks) it should show up as an option to pair, and have a connection good enough to display presentations, emails or even video.

In this article: hdpostcross, miracast, mirroring, mobilepostcross, roku, roku3, RokuStreamingStick, ScreenMirroring
All products recommended by Engadget are selected by our editorial team, independent of our parent company. Some of our stories include affiliate links. If you buy something through one of these links, we may earn an affiliate commission.