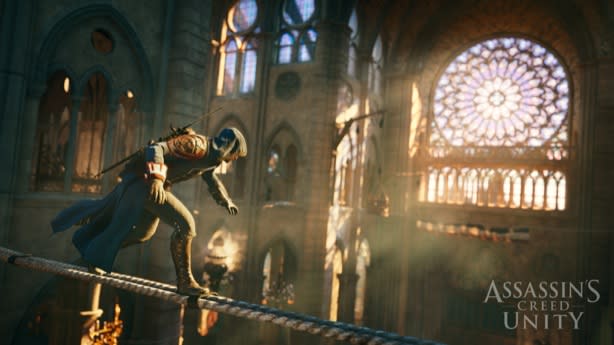 Assassin's Creed: Unity will be locked at 900p and 30fps on both Xbox One and PS4 when it launches in November, Senior Producer Vincent Pontbriand tells VideoGamer.

"We decided to lock them at the same specs to avoid all the debates and stuff," Pontbriand says. Most games in the new console generation hit 1080p, though the PS4 has more consistently supported higher resolutions and frame rates than the Xbox One, and that has been a point of contention for some players. Others see the entire debate as "a PR differentiation."

Pontbriand says that the limiting factor on new consoles is the available CPU and AI computation, not graphics processing. "It's the CPU [that] has to process the AI, the number of NPCs we have on screen, all these systems running in parallel," he says. "We were quickly bottlenecked by that and it was a bit frustrating because we thought that this was going to be a tenfold improvement over everything AI-wise, and we realized it was going to be pretty hard. It's not the number of polygons that affect the framerate. We could be running at 100fps if it was just graphics, but because of AI, we're still limited to 30fps."

Ubisoft is beefing up Assassin's Creed: Unity in other ways – the dev team rewrote "6 million lines of code" for the new game, Creative Director Alex Amancio told Joystiq. For historical context, Assassin's Creed 4: Black Flag received a post-launch patch on PS4 that bumped the game's resolution from 900p to 1080p. Assassin's Creed: Unity launches on November 11 for PS4, Xbox One and PC.
[Image: Ubisoft]
In this article: 1080p, 30fps, 60fps, 900p, assassins-creed-unity, frame-rates, microsoft, playstation, ps4, resolution, Ubisoft, xbox-one
All products recommended by Engadget are selected by our editorial team, independent of our parent company. Some of our stories include affiliate links. If you buy something through one of these links, we may earn an affiliate commission.