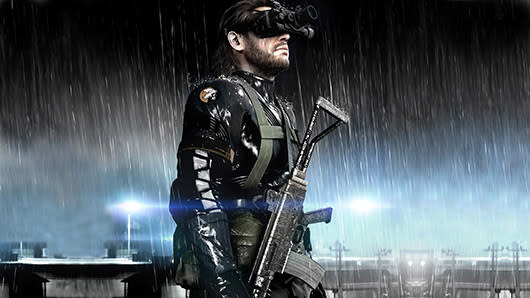 To prepare PC players for the upcoming Metal Gear Solid 5: The Phantom Pain, Konami has revealed plans to launch its interactive preface, Metal Gear Solid 5: Ground Zeroes, on Steam on December 18. According to the publisher, the game will feature enhanced graphics, including support for 4K resolution and an enhanced number of on-screen models and light sources.

While it's easy to argue that Ground Zeroes is diminutive - content-wise it sits somewhere between a demo and a proper game - Metal Gear Solid fans should enjoy the series' most intuitive, functional controls and most detail-packed environments. Our review awarded the game's console incarnation 3.5 of 5 stars while describing the game as "too good to be a cash-in, too calculated to be satisfying and too intriguing to spurn."
[Image: Konami]
Show full PR text
KONAMI Announces Steam Date for
METAL GEAR SOLID V: GROUND ZEROES

October 6, 2014 - El Segundo, CA - Konami Digital Entertainment, Inc. announced today that it will release the PC version of METAL GEAR SOLID V: GROUND ZEROES via Steam on December 18th, 2014. The Company also confirmed that it will be 4K compatible and will feature an increase in the number of simultaneous light sources, the number of models that can be displayed on-screen, and increased shadow resolution.

METAL GEAR SOLID V: GROUND ZEROES takes place in 1975 and sets in motion a series of events that culminate in the stunning plotlines of METAL GEAR SOLID V: THE PHANTOM PAIN. GROUND ZEROES centers on Big Boss - legendary hero and mercenary - as he infiltrates a sprawling secret prison base called 'Camp Omega' in Cuba on a rescue mission. He soon finds himself alone behind enemy lines with a truly non-linear mission that showcases key advances to the series made possible by its use of Kojima Productions' FOX Engine.

GROUND ZEROES is centered on a large open environment, with missions where time of day and weather have a dynamic effect on the game and its content. The game offers a total freedom of movement within its missions, with users choosing how they engage guards, the route they pick, and who they rescue. As such, it offers incredible replay value and encourages the player to revisit its content in order to find more of its many secrets. Furthermore, the game features an online global ranking system where players can compete in unique in-game and mission challenges and achievements to see how they compare against others around the world.
In this article: konami, metal-gear-solid--5-ground-zeroes, metal-gear-solid-5, metal-gear-solid-ground-zeroes, pc, steam, valve
All products recommended by Engadget are selected by our editorial team, independent of our parent company. Some of our stories include affiliate links. If you buy something through one of these links, we may earn an affiliate commission.