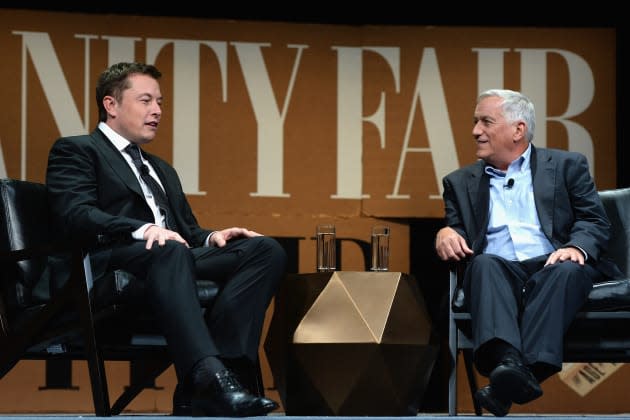 Need a few more breadcrumbs to follow until Elon Musk "unveils the D" (and something else) tomorrow? During an interview tonight at Vanity Fair's New Establishment Summit, Tesla's CEO told Walter Isaacson a few juicy tidbits about his news, without really revealing anything -- other than what we've already seen. According to Musk "One of the things is already there, and people just don't realize it." Also, some of the internet's guesses (dual engine? autonomous driving? AWD?) are apparently on track, as he said people are "directionally correct," but that they don't "appreciate the magnitude." You can watch a clip of of the interview embedded after the break and leave your own theories in the comments, we'll be reporting live from the unveiling in LA tomorrow night to find out the truth.

Update: Need a little more fuel for the rumor mill? Electrek is claiming that tomorrow we'll see a dual-motor equipped Tesla Model S P85D that might be capable of 0 - 60 MPH in under three seconds, acceleration that puts it in the range of Bugatti, Ferrari and the like. Magnitude, indeed.

Update 2 (10 / 9): Our own Nicole Lee (@Nicole) is on site for Tesla's event tonight. From what we hear, the doors will open at 10PM ET, with the unveiling set for an hour or so afterwards. We will not be liveblogging the event, but we will post any updates, both here and on our Twitter account @Engadget.

Update 3: The details are out -- check out what we know about Tesla's new AWD and (almost, kinda) self-driving cars here.

About time to unveil the D and something else pic.twitter.com/qp23yi59i6

Waiting for the D. #tesla pic.twitter.com/DKVDcl0NB5

Those cars are the model S. Still waiting for the D. pic.twitter.com/nejVKY0Ak5

In this article: d, elonmusk, models, p85d, tesla, teslamotors, video
All products recommended by Engadget are selected by our editorial team, independent of our parent company. Some of our stories include affiliate links. If you buy something through one of these links, we may earn an affiliate commission.