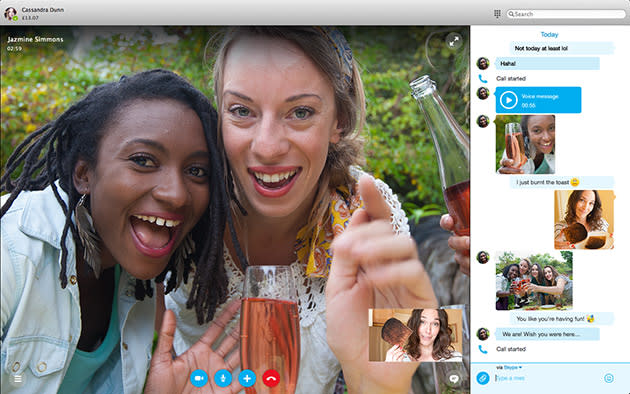 Skype has donned new clothes and gained new features for both Mac and Windows today, though the one for the latter's just a preview, which means its changes aren't final. The latest update for both platforms dresses Skype up in a new interface, which now shows thumbnails of your contacts' photos and features a bubble-style chat. That brings the desktop version closer in design to the mobile apps, but you'll notice larger spacing in the chat interface for Windows compared to Mac's. In addition, both apps now come with improved group video chat and display file icons when you share documents with friends. The best new feature for Mac, however, is the app's ability to let you do video calls and IMs side-by-side with a single click. You can download Skype 7.0 for Mac and the preview version for Windows right now, or look at the images in the gallery first if you need a bit of convincing. 5
In this article: app, mac, microsoft, preview, skype, windows
All products recommended by Engadget are selected by our editorial team, independent of our parent company. Some of our stories include affiliate links. If you buy something through one of these links, we may earn an affiliate commission.