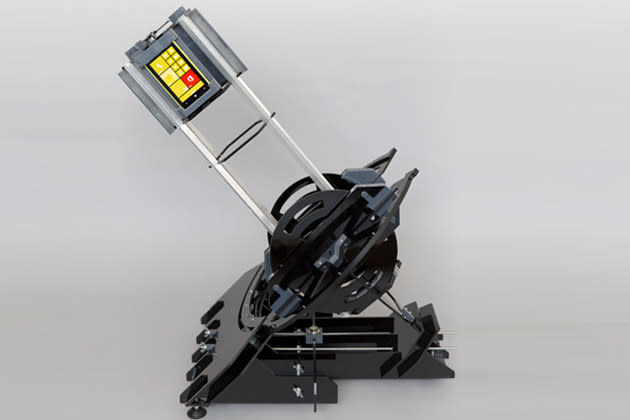 There are many, many people who've always wanted a powerful space telescope in their backyards but can't exactly afford one. For avid makers and DIY enthusiasts, at least, that's not such an absurd dream anymore -- not when someone has designed an automated 3D-printed telescope that's powered by a commercially available phone: the Nokia Lumia 1020. The device is called Ultrascope, and it stands one meter tall when assembled, with a base that measures 65 centimeters wide. It was created by Open Space Agency founder James Parr, who promised to upload the current design and future iterations to his organization's website once the ongoing beta testing's done.

Here's how the robotic telescope works: first, your Windows laptop locates the ISS and forwards its location to Ultrascope's Arduino shield to move its motors. After the telescope positions itself, the 1020 starts snapping images and sends them to the cloud for post-processing. Parr hasn't revealed how powerful Ultrascope is exactly, but it's worth noting that the 1020's 41-megapixel camera blew us away when we tested it. It'll sadly take a while before you can find out for yourself, though, as OSA's busy working with Microsoft at the moment, developing an app that connects Lumia phones to the device.

In this article: 1020, lumia, mobilepostcross, nokia, openspaceagency, space, telescope, ultrascope
All products recommended by Engadget are selected by our editorial team, independent of our parent company. Some of our stories include affiliate links. If you buy something through one of these links, we may earn an affiliate commission.