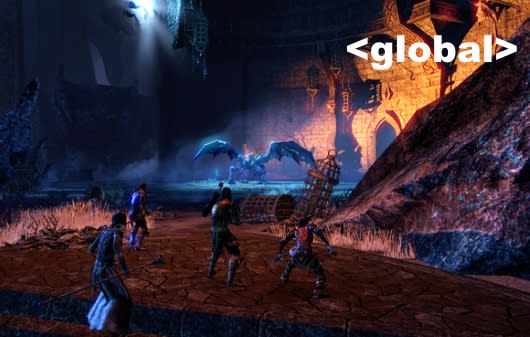 It's hard to be positive as a blogger, I'd say. It's not only really easy to get whipped up into a writing lather when you're upset about something, but negativity sells as well, at least in the short-term. People love a good rant, especially when it mirrors their line of thinking and doesn't bash a game they like. Even I, though I try to stay positive as a rule, have fallen into such patterns.

This week in Global Chat, we're going to see more negativity than normal -- or perhaps, more critical analysis with vivid metaphors. That doesn't mean it's all downers nor mindless emotional wordsplosions. But I thought it was fascinating how these stories caught my eye over the past couple of weeks of MMO blog reading.

The future of MMOs is a continuing hot topic for many players and bloggers, as evidenced by the post over on Kill Ten Rats. Ravious essentially makes the same argument that I've heard from many corners, which is that the stale status quo of the industry must soon give to a new paradigm.

"The MMO design space people should be exploring should be more like Minecraft than World of Warcraft," Ravious declares. "OK, let me retract a bit. I don't mean MMOs should be building and exploration games, although parts of that do help. However, Minecraft is not aimed at progression, and I feel like MMOs are stuck in this rut of progression first, progress second."

2. Mana Obscura: Death of a Super-Genre

Speaking of a potentially stagnant genre, the demise of Blizzard's Titan rippled throughout the community, causing many bloggers (including yours truly) to muse about how this might affect other projects going forward. Gazimoff makes a bold claim: that the era of the big, full-featured MMO is at an end.

Gaz's predictions do not make for happy reading: "For the MMO fan, times are going to be tough. Some would say that the MMO genre is being carved up, with the constituent parts being absorbed into other areas of videogaming to create something new. Others would argue that MMOs are stepping back from trying to be all things to all people, and instead focus tightly on a single unique experience that they can polish to a shine. Either way, the age of the polymath is over."

Let's take a brief negativity break to chat about one MMO that's making a gamer really happy. Bhagpuss gushes about his first 20 levels in ArcheAge. Even with a "meh" storyline, he thinks that sum of the game's parts makes for a world that "feels like somewhere."

"When an NPC asks you if you wouldn't mind taking a packed lunch to a guard further down the road (real example), the request somehow seems more reasonable, the journey more believable, simply because you travel along a road that is visibly and evidently being used by players for their own self-generated and equally mundane journeys. It's hard to explain why. It reminds me a lot of early EverQuest, when players stuck to the roads because to do otherwise was suicide. I think it's something to do with shared endeavor," Bhagpuss testifies.

4. The Mystical Mesmer: A world without levels

"Are MMOs even the same without [player levels]? Is there any way for us to progress in the modern day without watching a number go up -- a number which is supposed to be tied to our power, equipment, abilities, and a whole host of other things?"

These questions kick off an essay that examines the pros and cons of levels in what I would deem a fair fashion. What he really chews on is the question of what would replace the typical levels so that there is still progression, in particular three factors that he sees as the driving forces of MMOs: "player skill, player agency, and player communion."

I so love the question that Tyler leads off with in this post, which is basically, "Why do raids need to be the toughest challenge in MMOs?" He sees raids as artificially dividing players up according to skill levels instead of bringing people together from all walks of life and styles of play.

"That seems to be the overriding priority for MMO developers," Tyler argues. "Not to provide opportunities for socializing, but to make players sweat as they struggle with content of the highest difficulty. Not only does making group content and hard content synonymous not aid socialization, it actively harms it."

Speaking of both raids and good questions, Waxwind struggles to understand why, if WildStar is all about dem hardcore raids, it invested so much time and effort into the non-raiding portions of the game? Why not just make it into a lobby for 40-man raids and nothing else?

"Now, differentiating yourself as a hardcore raider friendly game might be a good way to specify your target audience, but if you do so and still spend the resources on a ton of mediocre non-raiding related content, I think you are wasting resources. You should be focusing on your niche and not trying to broaden it needlessly," Waxwind writes.

Awesome MMO blog opinions abound all over the internet -- and Justin "Syp" Olivetti reads them all (or skims really, really fast)! Global Chat seeks to round up the most interesting and zany posts from the MMORPG blogosphere. Who knows? You might discover a new favorite blog this week!
In this article: archeage, blog, bloggers, blogging, blogosphere, blogs, column, death-of-mmos, everquest, global-chat, levels, minecraft, mmo-blog, mmo-blogging, mmosphere, opinion, progress, progression, quotables, raids, wildstar, world-of-warcraft, wow
All products recommended by Engadget are selected by our editorial team, independent of our parent company. Some of our stories include affiliate links. If you buy something through one of these links, we may earn an affiliate commission.