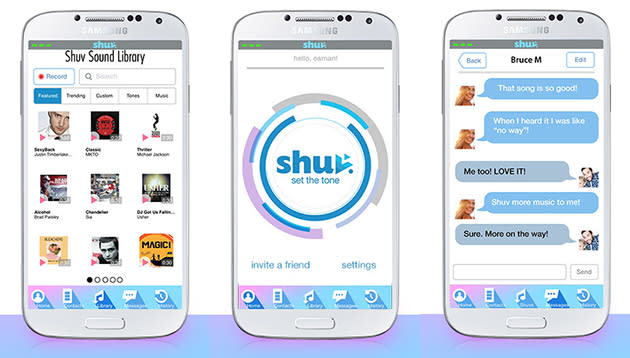 A new messaging and VoIP app called Shuv boasts a special feature not found in its competitors: ring forward tones. Remember how ringback tones take the place of the typical ringing you hear when you call someone? Well, ring forward does the opposite, as it lets you set the audio your friends will hear when you call them up or send them picture messages via the app. You can choose from among the free tunes or from the 15,000 songs in Shuv's library filled with Sony Music-licensed tracks by Beyoncé, Adele, Justin Timberlake, Michael Jackson, Pharrel and Miley Cyrus, among many others. It'll cost you $1.99 per month to access the Sony library, though, so we wouldn't be surprised if you choose to record your own rendition of JT's SexyBack instead. If you're not married to any messaging app yet and want to try Shuv, you can download it right now for both iOS and Android devices.

In this article: android, app, ios, messagingapp, mobilepostcross, ringback, ringforward, shuv, SonyMusic
All products recommended by Engadget are selected by our editorial team, independent of our parent company. Some of our stories include affiliate links. If you buy something through one of these links, we may earn an affiliate commission.