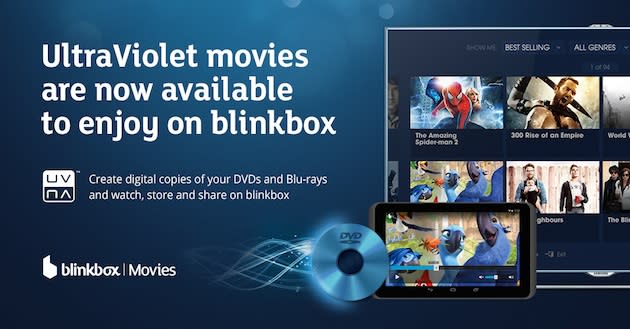 Tesco's Blinkbox video streaming service might be facing a less-than-certain future, but that doesn't mean the supermarket giant is ready concede defeat just yet. Mirroring similar moves by Amazon and Sky, the company today announced become the first major UK retailer to let customers grab digital copies of their DVDs and Blu-rays via Ultraviolet, which can be stored inside a Blinkbox account. Tesco isn't just limiting the locker service to movies bought in its own supermarkets, either, making all of your Ultraviolet-enabled titles available to instantly stream or download across a wide number of devices, including the new Hudl2. To get started, you'll need to create your Ultraviolet library, link your Blinkbox account and then get streamin'.

In this article: blinkbox, hdpostcross, hudl, hudl2, movies, tesco, uk-feature, ultraviolet
All products recommended by Engadget are selected by our editorial team, independent of our parent company. Some of our stories include affiliate links. If you buy something through one of these links, we may earn an affiliate commission.