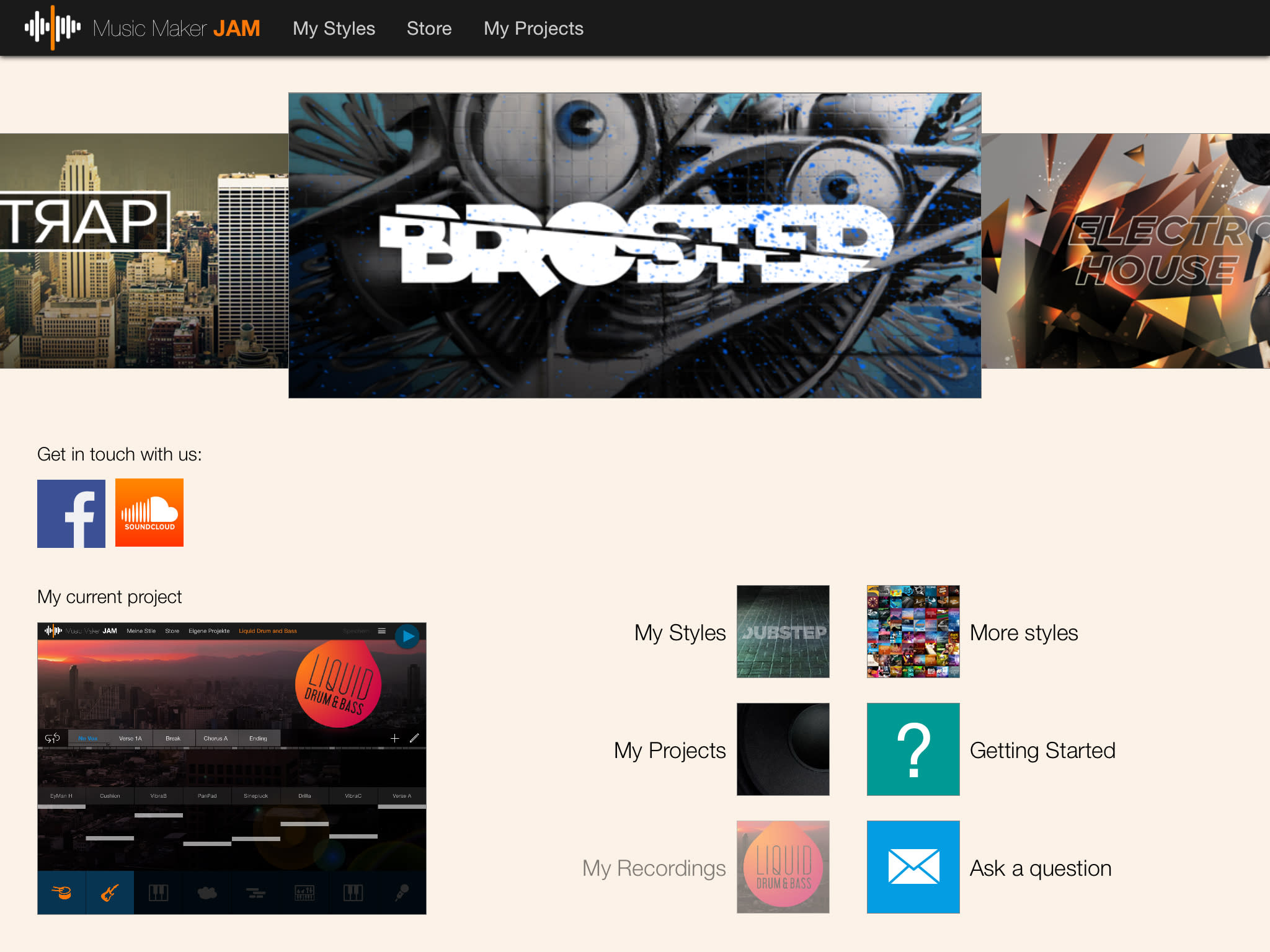 MusicMakerJam is a free looping app available for iPad. Developed by music industry veteran, MAGIX, MusicMakerJam offers an extremely wide range of looping capabilities within its free version but only includes a limited set of samples starting with the Liquid Drum and Bass style. If you're a casual musician looking to have fun, you may find yourself playing with this app for a few hours; more than that if you have a fat wallet. MusicMakerJam Requires iOS 7.0 (or later) and is compatible with iPad.

After tiring of LD&B, I noticed that MAGIX offers three free styles of your choosing, so I downloaded more styles and played with them for a while too. After using up your free styles, each style costs US$2.99. The built-in store is actually a nice browsing experience for their other styles. Tap into a style, and you can listen to a song and demo individual instruments within that style. I'd prefer to demo more samples within the style before forking over my money, but it does give you a basic understanding of the style. The mixing interface was actually pretty easy to learn thanks to the built-in, visual tutorial. It has eight customizable tracks where you can select the style/instrument/loop of your choosing. Each track has independent audio levels (and mute), so your piano doesn't overpower your jazz flute. At a project level, you can adjust harmonies and change the chord progression of the project within its 8-bar confines. You can also change the tempo and use an "FX" interface (I would typically call it an XY pad). They do put an interesting spin on the XY pad by including a "Hold & Tilt" option: if you hold the button and tilt your iPad, it uses the accelerometer to change the overall sound of the project like an XY pad. Those are the basics of this app; I'm really impressed with its capabilities, but I'm stuck on the overall cost of using it. I'm typically the kind of bedroom musician who would download all the available styles just to mess around, but there are simply too many for my wallet at a cost of over $250.00 for the current list. Ideally, MAGIX would reconsider its pricing structure and make the styles $0.99 each and offer a $50.00 discounted bundle for obsessive users like me. Unfortunately, it seems that they're marketing this app towards people who actually want to make money with these loops, not to people who just play around when bored. I think their pricing structure limits their market potential and prevents casual users, like me, from buying into their app at all.

I've played with a lot of these looping apps over the years; this one seems to have the most promise out of all the recent entries, but I can't get over their prices. This is the closest app I've seen to a replacement for savageapps "iAm" series of beatbox, guitar, drums, etc. When those worked, they were amazing (and worth the price). Unfortunately, savageapps hasn't updated any of the "iAm" apps (or any of their other apps) in almost 2 years. That said, MusicMakerJam is the best looping app I've seen in a while, so if you have the money, spend some.

In this article: iPad, Music, MusicMakerJam, review
All products recommended by Engadget are selected by our editorial team, independent of our parent company. Some of our stories include affiliate links. If you buy something through one of these links, we may earn an affiliate commission.