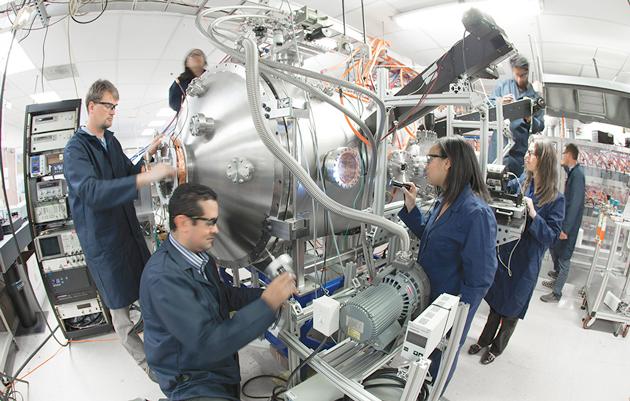 Remember back in the '50s, when official-sounding newsreels promised that we'd have new-kew-lur-powered cars by the '70s and no one would ever be unhappy? Probably not, since we've gotten a skewed sense of history from watching too many episodes of Futurama. Still, several decades behind schedule, the promise of clean and unlimited energy might finally be looming upon the horizon, thanks to Lockheed Martin. The defense behemoth believes that it might have a working prototype of its Compact Fusion Reactor in a decade, which might just save the world as we know it.

For those not in the know, nuclear power is great, but there are many reasons why we've never ditched coal and gas in favor of fission. For starters, there's risk of a meltdown, the process produces hard-to-dispose-of nuclear waste and throws out highly lethal radiation at all times. Fusion, by comparison, is a lot less dangerous, and could theoretically be shrunk down to the point where it could power an airplane that never needs to land in order to refuel.

A team at the company's Skunk Works, lead by Dr. Thomas McGuire, has cherry-picked elements from previous fusion experiments to build a magnetic containment chamber that's 90 percent smaller than previous devices. The reactor's small size means that it's possible to turn prototypes around in under a year, and McGuire believes that Lockheed Martin will be able to demonstrate true fusion energy by 2020. The system also promises to be able to plug into the existing gas turbine power infrastructure, which would instantly eliminate carbon emissions in the sector, and, even better, enhance "energy security," which is a euphemism for not buying coal and gas from your political enemies.

In this article: Climate Change, Compact Fusion Reactor, Dr Thomas McGuire, Energy, Fusion, Lockheed Martin, Power, TL16NuPwr, Tom McGuire
All products recommended by Engadget are selected by our editorial team, independent of our parent company. Some of our stories include affiliate links. If you buy something through one of these links, we may earn an affiliate commission.