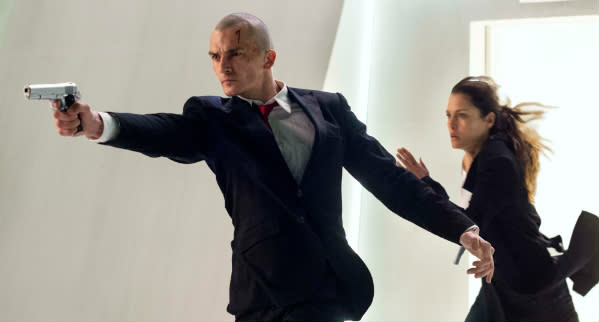 Hitman: Agent 47 is the latest silver-screen video game adaptation to go the way of the delay, according to multiple reports. Hollywood Reporter and Deadline says the film based on IO Interactive's stealth series is due on August 28, 2015, after 20th Century Fox pushed it back six months from its original date of February 27.

For those of you just tuning in, this isn't Hitman's first showing on the big screen. Indeed, we're coming up to the 7th anniversary of the first Hitman film, a critically panned affair as attested to by its 14% score on Rotten Tomatoes.

Regardless, Fox is reloading Hitman for another shot at Hollywood success, with Homeland star Rupert Friend replacing Timothy Olyphant as the bald assassin. Zachary Quinto, AKA Heroes' psychopath Sylar and Spock from the new Star Trek films, stars as John Smith. No, not the Doctor, but the lead villain according to Hollywood Reporter.

Fox adds, "The mission brings startling revelations about the lethal agent and his prey, hurtling them on a collision course with their pasts. And this time, his number may be up."

Prediction: That last sentence, all over posters. Because Hollywood.

[Image: 20th Century Fox]
In this article: fox, hannah-ware, hitman, hitman-agent-47, hitman-film, hitman-movie, IO-Interactive, rupert-friend, Square-Enix, zachary-quinto
All products recommended by Engadget are selected by our editorial team, independent of our parent company. Some of our stories include affiliate links. If you buy something through one of these links, we may earn an affiliate commission.