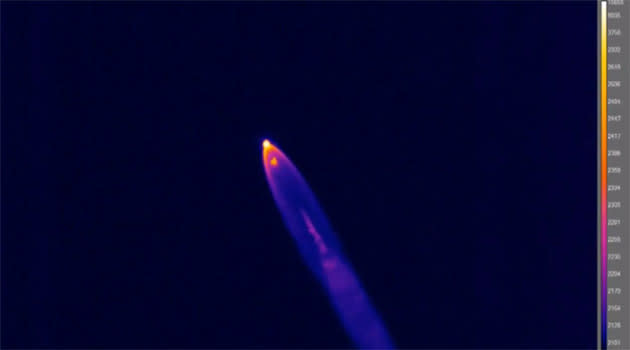 NASA wants to refine the ability of future spacecraft to land on Mars, since they'll have to ferry humans and other large payloads to the red planet. To that end, the agency has teamed up with SpaceX to record thermal camera footage of the Falcon 9 rocket as its first stage detaches and burns through the atmosphere. The first stage of a rocket is typically its largest part and what's ignited at launch -- once it runs out of propellant, it separates from the upper stages, usually as the rocket nears the boundary between our planet and outer space. Its descent back to Earth presents Mars-like conditions, which means data collected from the footage could, in NASA's words "provide critical engineering information for future missions to the surface of Mars."

To make it happen, the agency outfitted two planes with long-range infrared cameras and had them film the controlled flight in September from 50 miles away. What these cameras managed to capture, and what you'll see in the video below, is the thermal energy given off by the rocket as it descends at supersonic speeds. NASA says it has saved millions of dollars by doing this, as it would have developed test rockets and performed practice flights if the option wasn't available.

In this article: falcon9, nasa, rocket, space, SpaceX
All products recommended by Engadget are selected by our editorial team, independent of our parent company. Some of our stories include affiliate links. If you buy something through one of these links, we may earn an affiliate commission.