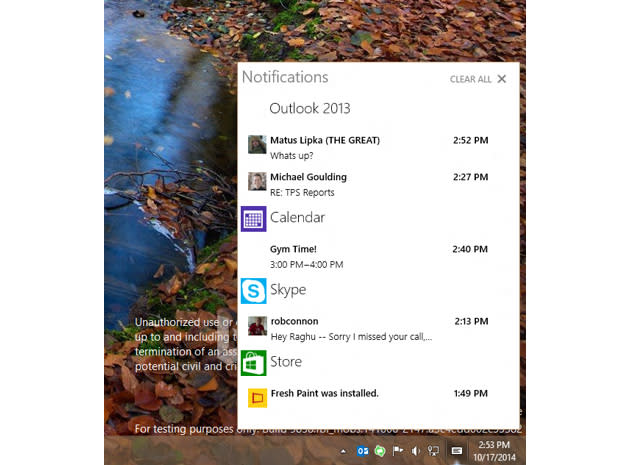 If Windows 10 is going to unify your experiences on devices ranging from smartphones to PCs, it only makes sense that key mobile features would reach the desktop, right? Microsoft certainly thinks so. The team in Redmond has released an updated version of the Windows 10 Technical Preview that brings Windows Phone's Action Center (that is, a notification area) to PCs. Whether there's an app update or an important meeting coming up, you can now find about it all in a single place; you won't have to check Live Tiles or jump into the apps themselves. No, it's probably not worth installing Microsoft's pre-pre-pre-release operating system just to try this out, but it's definitely worth an update if you're already living on the bleeding edge.

In this article: actioncenter, microsoft, notification, notifications, software, technicalpreview, windows, windows10
All products recommended by Engadget are selected by our editorial team, independent of our parent company. Some of our stories include affiliate links. If you buy something through one of these links, we may earn an affiliate commission.