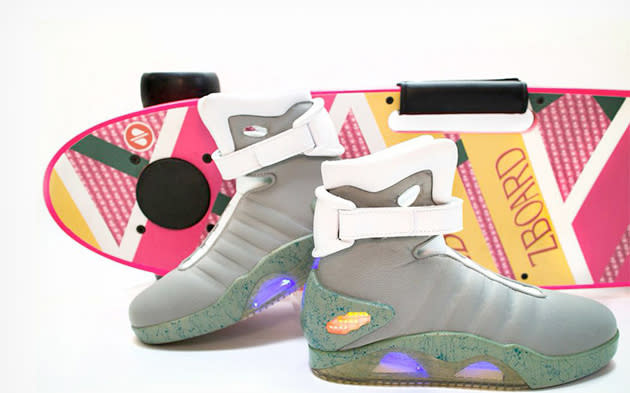 Remember when we told you about HalloweenCostumes.com's officially-licensed light-up high tops from Back To The Future Part II? We joked that the kicks would have gone great with ZBoard's limited-edition Hoverboard that it produced for the Michael J. Fox foundation last year. Unfortunately, only 50 decks and 25 full boards were created for the auction, so it looks as if that (time-traveling) train has sailed. Well, until now, that is, since the company has now produced a general-sale run of its bright pink electric skateboard, and will even sell you the high tops in a single bundle. The board on its own will set you back $600, while a set with the futuristic kicks is priced at $700, plus one lucky competition winner will win a complete replica of Marty McFly's future outfit from the movie. Be warned, however, as you've only got 14 days to scrounge together the cash, or else you'll be outtatime (geddit?).

In this article: Air Mag, Back To The Future, BTTF, HalloweenCostumes, High Tops, Hoverboard, Marty McFly, Zboard
All products recommended by Engadget are selected by our editorial team, independent of our parent company. Some of our stories include affiliate links. If you buy something through one of these links, we may earn an affiliate commission.