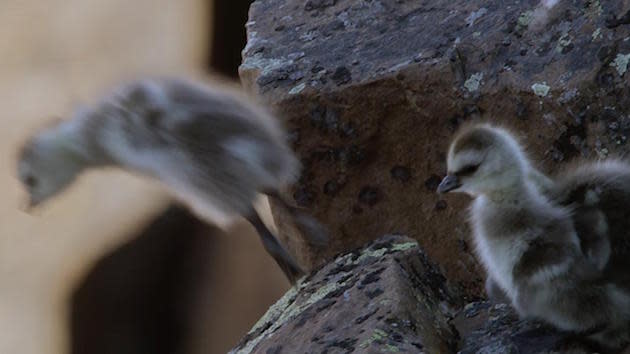 In the early days of HDTV, BBC's nature docs were the go-to showpieces for your new home theater gear. Some time has passed since then, and Planet Earth on Blu-ray doesn't look quite as good as it used to. With Life Story, however, the outfit's jumped into the world of UHD 4K filming for the first time. How's it look? Terrifying. Not for the reason you might expect, though. The teaser clip is of the death-defying journey that Greenland's barnacle geese chicks take to leave their nests. Because they can't fly, the adorable goslings have to glide some 400 feet down a sheer cliffside, to their parents and the feeding ground below. And by glide, we mean enter a controlled fall for a bit and then miraculously survive after tumbling along the rock wall. If the streaming clip over at the source isn't enough for you, the full episode debuts on BBC One at 9 p.m. this Thursday and we've embedded the series' trailer just below.

In this article: 4k, bbc, BbcOne, gosling, hd, hdpostcross, LifeStory, nature, uhdtv
All products recommended by Engadget are selected by our editorial team, independent of our parent company. Some of our stories include affiliate links. If you buy something through one of these links, we may earn an affiliate commission.