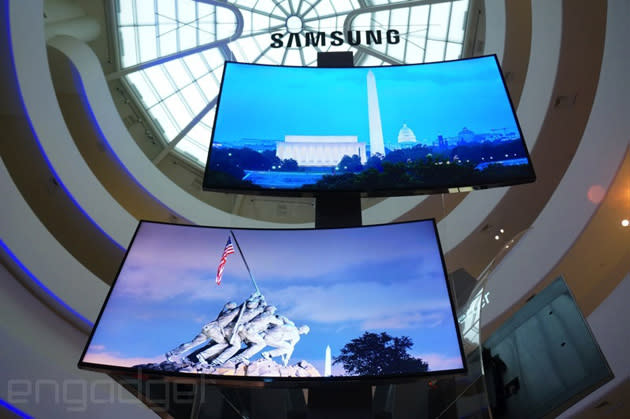 If Amazon, Netflix and DirecTV's promised 4K content aren't enough to entice you to pick up an ultra high definition TV, maybe this will help: Samsung is now giving buyers of its new curved TVs eight UHD films for free. The films are actually part of the company's UHD video pack, a $300 1TB hard drive pre-loaded with three documentaries, Night at the Museum, The Counselor, X-Men Origins: Wolverine, G.I. Joe: Retaliation and World War Z. Sony has a similar promotion tied to its UHD sets, an effort to assuage buyer fears that there won't be anything to watch on their expensive 4k display. Sammy's freebie applies to all new purchases of its 55, 65 and 78-inch curved UHD sets from now until the end of June. Already have one? Check out the source link below to nab your new hard drive.

In this article: 4k, 4kcontent, content, hdpostcross, samsung, U9000, uhd, videopak
All products recommended by Engadget are selected by our editorial team, independent of our parent company. Some of our stories include affiliate links. If you buy something through one of these links, we may earn an affiliate commission.