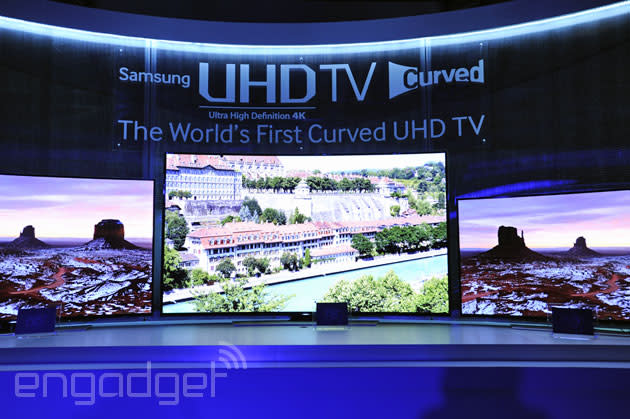 We got our first peek at Samsung's latest high-end HDTVs -- including the new curved shape that it says creates a larger viewing "sweet spot" -- at CES back in January, and now they're just about ready to come home. Of course the new shape isn't all there is to offer, and while Samsung isn't joining LG in pushing any new OLED TVs, it is expanding its lineup of Ultra HD screens and bringing more 4K content to watch thanks to a new deal with Fox. There's also upgraded Smart Hub software with multitasking to pull in streaming video and live TV all at once, new quad-core CPUs to boot it all up in just 1.8 seconds, and a simpler pebble shaped remote for control. That massive 105-inch Ultra HD TV we were drooling over is still penciled in to launch during the second half of this year, but if you're looking for a more modest upgrade, then we have new details on price and release for most of the other models (LCD only, no word on plasma). Of course, if you opt for one of the Ultra HD TVs, you'll probably be looking for stuff to watch. Samsung will stream or download 4K video in apps from Netflix, Amazon, M-GO, Comcast and DirecTV, but for the highest quality you'll probably need its UHD video pack. Basically a 1TB storage device stuffed with movies, it's $300 and includes Night at the Museum, The Counselor, X-Men Origins: Wolverine, G.I. Joe: Retaliation and World War Z, plus three documentaries. Samsung plans at least one more pack for release this year, and says it's working with Fox to pioneer a "sustainable UHD content distribution ecosystem." We talked to Fox's Mike Dunn during CES about an extension to the Blu-ray format that could handle higher res video and other features, but so far there's nothing new to report there. Samsung also has a new BD-H6500 Ultra HD upconverting Blu-ray player for $180 along with a few sound bars and sound stands -- we'll get our second chance at a first impression today, so check back for a few hands-on pics.

In this article: 4k, BD-H6500, H7150, H8000, hdpostcross, lcd, led, samsung, U8700, U9000, ultra hd
All products recommended by Engadget are selected by our editorial team, independent of our parent company. Some of our stories include affiliate links. If you buy something through one of these links, we may earn an affiliate commission.