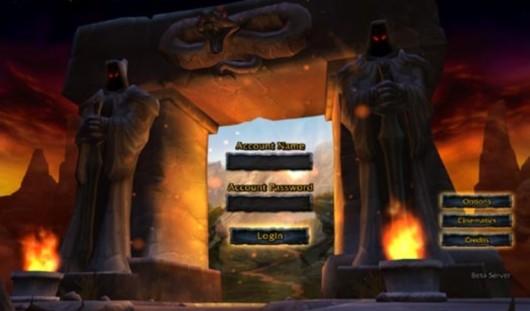 I'm really not a big fan of those constant reminders from the media as to how much time has gone by using pop culture as reference points. I'm really not. So I kind of hate myself for saying this, but friends, next month will be World of Warcraft's 10th anniversary! Ten years! How old are we now!

Back in November of 2004, I was a wide-eyed 28-year-old bachelor who had just met his future wife and was generally leery about MMOs to date. Now I'm a grizzled 38-year-old journalist, father of three, and veteran of more MMOs than I can count (because I cannot count past 22). A decade can contain so much history, especially when looked back all at once.

I played World of Warcraft for many years, and while most of the memories have faded and merged together in a technicolor morass, there are a few vivid recollections of the launch period that stir emotions in me even today. Ten years, 10 launch memories. I think that's appropriate. 1. It was an agonizing wait.

Players had known that World of Warcraft was on the way since the early 2000s, although it wasn't really on my radar until around February 2003. When I discovered the website and read an early article about Elwynn Forest and how you could find items in the world that would trigger quests, I knew that this was the MMO I had so desperately wanted.

Although I never was a huge Blizzard fanboy, I was well-acquainted with the studio's devotion to polish and fun products, and the prospect of seeing Blizzard's take on MMOs was too good to pass up. The only problem was that the studio was notorious for long beta and development cycles, and at the very least I knew that I was in for several months of waiting. That wait turned into a year-and-a-half, and I'm surprised my sanity remained at the end of it.

2. The beta was one of the hottest tickets in town.

Part of what made the wait so incredibly hard is that there were a select lucky few who actually got to play the beta and crow about it constantly. Sure, the beta gradually expanded, but for the longest time demand for it far, far outstripped what little supply Blizzard was providing. Penny Arcade provided a memorable strip back then of the agony and conflict that players had when they saw friends in the WoW beta.

As for me, I think I got in about two or three weeks prior to launch -- you know, when the devs threw up their hands and said, "Let the rejects in! They can't really screw it up now!" I only played briefly to see the final moments of beta (below). I had never been part of an MMO end-of-beta event, so I really had no idea what to expect. I didn't even know how to play that character, since I was trying to stay as ignorant as possible until launch. I merely wanted to witness the promised carnage.

And carnage it was. The devs unleashed all sorts of large demons and infernals in major populated areas, including Stormwind and the Crossroads, and players died by the score. It was fun in that "ha ha, I guess I'm dead again, isn't this great?" sort of way, but mostly because it was the devs and players blowing off steam at the end of a long development cycle and celebrating before things got "serious."

Even though the WoW beta was immensely popular, there still was some uncertainty with its launch since EverQuest II announced that it would be releasing a couple of weeks earlier. The sequel to the current king of the MMO throne getting the jump on the upstart competition was no laughing matter, and some players were strongly debating which would come out on top.

Sure, looking back it seems silly, but I can't underscore enough how little everyone knew -- including the developers -- that World of Warcraft would become this gaming juggernaut. People were genuinely worried it would get steamrolled by EQII, whereas the reality was the other way around. 5. I bought the collector's edition in Best Buy on Day One with no pre-order.

For a long time, I was strongly against pre-orders. I felt that if a store wanted my business, it should provide the product first before it got my money. This is why I didn't even know where I'd get my copy of World of Warcraft on launch day. I was really fortunate, since I drove right down to Best Buy on my way to work and picked up one of a stack of collector's editions only to find out that the stores got cleaned the heck out mere days later.

By the way, that CE was one of the best decisions I ever made. I loved the soundtrack and every time I return to World of Warcraft, my little Zerg and mini-Diablo pets are waiting for me.

6. My first moments were magical.

Even though I was there for the end of the beta, the launch day is what I considered my first real day in WoW -- and it was magical. I created a Dwarf Hunter named Chark and then spent an hour marveling at the level of polish and detail in this beginner zone. Look! My footsteps left prints in the snow! My breath fogs in the cold air! Ooh, that soundtrack is divine!

It didn't take long before the combination of questing and killing had me completely hooked. It would still be a while before I would get the hang of the game or join a guild or stick with a character long enough to get it to level 60, but that didn't matter. I finally felt as though an MMO was rolling out the welcome mat for me, and I gladly stepped into it. 7. The strategy guide wasn't too helpful, but I liked it for the comics.

Yeah, 2004 was at the tail end of the "I still bought the overly expensive, underly helpful strategy guides" era. Please do not judge me too much; I was just excited about the game. Unfortunately, the Bradygames guide itself wasn't a boon of hard-to-find information. I was hoping that it would be pointing me to all these secrets in the world. Instead, it was really standard stuff, a few maps, and a lot of pretty pictures. At least it had a lot of funny comic strips (once again, from the PA guys) that offered entertainment value.

8. It was the biggest MMO launch to date, but wasn't a multi-million subscription hit until later.

One of the myths of World of Warcraft, particularly for people who weren't following it at the time, is that it somehow sprang out of the gate with millions upon millions of players. The truth is while it had a terrific opening and sold 240,000 copies on its first day, it didn't pass the million-subscriber mark until months later (we know that it had 1.5 million by March of that year). Impressive, but nowhere near as big as it would become over the next four or five years. 9. You couldn't play half of the time for weeks afterward.

We all know the tired joke: The biggest MMO launch failure was the last MMO to launch. It's hard to remember how bad past ones are, since our memories filter that out, but I can attest to the fact that WoW's was as rough as can be. The big problem was that even with the high demand during beta, Blizzard was woefully unprepared for the stampede that occurred at launch. This resulted in flooded servers, enormous queues, and players simply not able to log in, sometimes for days at a time.

It took a long time to fix, too. Blizzard rolled out an additional 40 servers on top of the launch 40 by the following weekend, but the problems persisted. President Mike Morhaime issued a rare public apology for the issues, and by January they were mostly settled. But it was rough. You have to imagine that all of your friends are playing this hot new MMO that you also own, but you can't log in that evening at all. Or the next. Or the next. I had some streaks like that, and they nearly drove me into a competitor's waiting arms.

It's hard to look back at WoW's launch without thinking about all of its history since then as well as its enormous influence on the industry. Some folks wish that it had never been made; others can't imagine getting into MMOs if it hadn't been for this title.

But my final memory is a faint recollection of how I knew, even then, that something fundamental in the industry had changed. There was finally an MMO that met me where I was at instead of demanding that I learned all of its confusing lingo and unwieldy setups. I, and hundreds of thousands of others, embraced that. For better or worse, there was no going back, and 10 years later, this one game's launch still impacts how, what, and why I play MMOs today.

Justin "Syp" Olivetti enjoys counting up to ten, a feat that he considers the apex of his career. If you'd like to learn how to count as well, check out The Perfect Ten. You can contact him via email at justin@massively.com or through his gaming blog, Bio Break.
In this article: activision, blizzard, blizzard-entertainment, fantasy, featured, humor, opinion, p10, perfect-10, perfect-ten, roundup, the-perfect-10, the-perfect-ten, top-10, top-10-list, top-ten, top-ten-list, warcraft, world-of-warcraft, wow
All products recommended by Engadget are selected by our editorial team, independent of our parent company. Some of our stories include affiliate links. If you buy something through one of these links, we may earn an affiliate commission.