The ShapeScale 3D scanner can color-code your body changes

An app update turns this smart pen into a 3D scanner 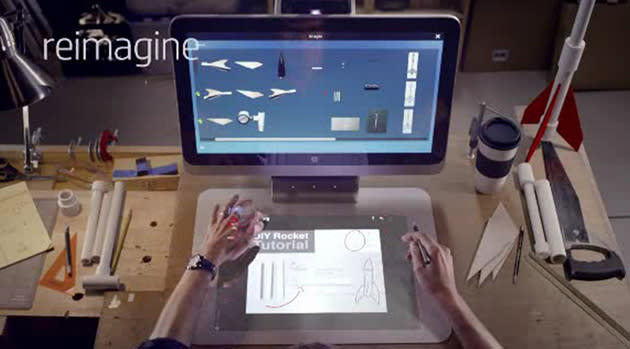 We've seen some strange devices here at Engadget, but honestly, we've never seen anything quite like Sprout. It's a unique machine that combines an all-in-one Windows 8 PC with a set of 3D scanning cameras, a giant tactile touchpad and a downward-facing projector (for displaying graphics on said touchpad). The design is built around a concept HP is calling "blended reality" that blends the 3D physical world with our 2D digital one. The obvious target audience is creative types. You know: makers, tinkerers, designers, etc... Rather than the traditional method of control built around mice and keyboards, Sprout focuses on touch and pen input. The 23-inch LCD serves as the primary display, but it's the bottom display, the 20-inch capacitive pad positioned under the camera and projector that serves as the primary point of interaction.

In a short, sparsely narrated demo on stage HP showed off the ability to flick images from a library on the main screen down to the touch mat for manipulation. More impressive though, was when it combined all the various features into one task. The rep on stage placed a physical object on the mat. The cameras then took an amazingly quick 3D scan of it, removed the background and placed the model in a slide where it could be resized or rotated.

The cameras can take regular photos, 3D scans or even parse text from a printed page. So you could scan a sheet of text then insert graphics around it or manipulate the font to build a beautiful flyer or magazine layout. Regardless of what you do with it though, the idea is to get you using your hands and stepping away from the mouse. Beyond just pinching, tapping and dragging photos, you could put the controls for a video editor on the mat and monitor your final product on the screen. The projector can put a keyboard on the bottom of the mat for typing up a quick email or even project custom controls for a game (could be super useful for something like Starcraft).

We know it's hard to explain. Just watch the video above to get a better idea of what to expect. Or check out the clips below from partners that HP granted early access to Sprout, including artists.

In this article: 3d scanner, all-in-one, hewlett-packard, hp, Sprout
All products recommended by Engadget are selected by our editorial team, independent of our parent company. Some of our stories include affiliate links. If you buy something through one of these links, we may earn an affiliate commission.