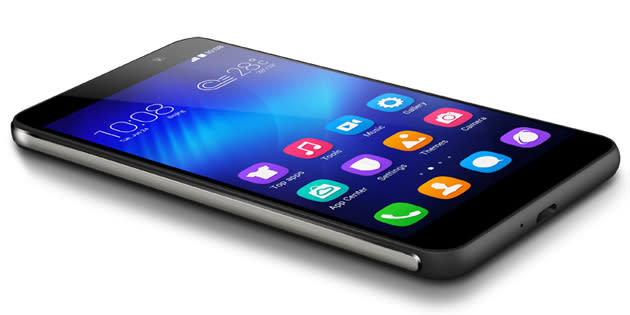 Huawei's Honor series of smartphones are designed to pack a punch without punching a hole in your wallet, but these devices typically don't see the light of day outside of China and other select markets. Today, that changes, with the announcement of the European launch of the Honor 6, a high-powered Android phone with an attractively low price tag. The handset may look like a relatively generic square with rounded corners, but the spec sheet tells a different story. A 5-inch, 1080p display adorns the front of the device, while a 3,100mAh battery allegedly keeps the thing going for more than two days with normal usage. It also packs in 3GB of RAM, a 13-megapixel primary camera with f/2.0 aperture, and a 5MP front-facing shooter with wide-angle lens. The real star of the show, though, is Huawei's Kirin 920 octa-core chip, which also includes a Cat 6 4G radio capable of tapping into LTE-Advanced networks that support maximum download speeds of 300 Mbps (Vodafone has one of those in the UK, by the way). The Honor 6 will be available on Amazon's regional portals from 9AM GMT today for £250 in the UK and €300 elsewhere in Europe. While Huawei manufacturers the handset, it's doing its best to keep that fact hushed up. The company's always tried to dissociate itself somewhat from the Honor brand, and the same is true in Europe, where it's essentially being introduced as a new company in its own right. The only visible evidence of the affiliation can be found on the new Honor website, where Huawei's named as the copyright holder. The Chinese manufacturer isn't exactly a household name in Europe, but by concealing its connection with Honor as much as possible, it's hoping to create a distinct identity for the brand. It wants Honor to be seen as a new, disruptive player that sells great smartphones for affordable prices, in the same way OnePlus has managed to manufacture a persistent buzz around itself and its One flagship. The only difference with the Honor 6, though, is that you'll actually be able to buy it.

In this article: europe, honor6, huawei, huaweihonor6, mobilepostcross, uk
All products recommended by Engadget are selected by our editorial team, independent of our parent company. Some of our stories include affiliate links. If you buy something through one of these links, we may earn an affiliate commission.