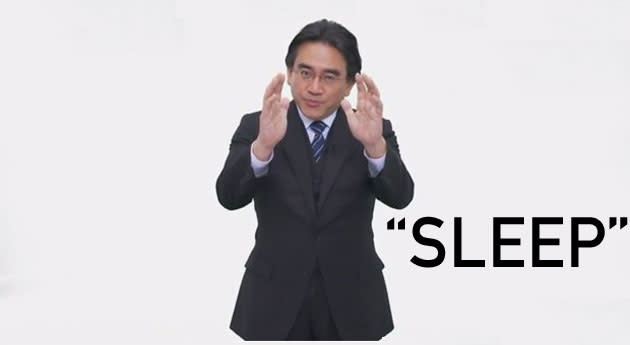 At a briefing earlier today, Nintendo CEO Satoru Iwata explained that the company was now developing a device to monitor sleep and levels of fatigue. However, it didn't sound like it would be a wearable device -- even though it's the done thing. According to a Reuters report, the device would track you from your bedside and is currently being co-developed with Resmed. The US-based company typically makes products for people with sleep disorders. It will form part of its new healthcare division inside the gamesmaker, marking a return to wellness hardware: something it has already touched on, way back, with the Wii Fit board. For an idea of what it all could do, we've added a video from Resmed's sleeping tech. Exactly how this will dovetail with our Tomodachi Life village remains to be seen.

In this article: fatigue, nintendo, QualityOfLife, sleep, sleeptracker
All products recommended by Engadget are selected by our editorial team, independent of our parent company. Some of our stories include affiliate links. If you buy something through one of these links, we may earn an affiliate commission.