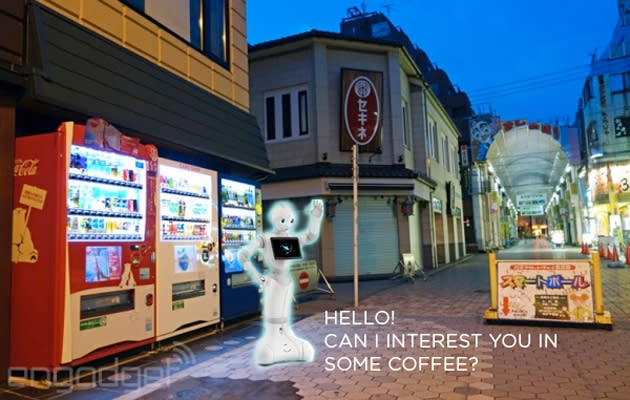 Elon Musk may be terrified of self-controlling robots, but the retail industry is clearly hoping they'll save cash in the long term. Nestle, for instance, has purchased 20 copies of Softbank's Pepper robot as the new spokes-droid for its food business in Japan. If successful, then the food manufacturer could have up to 1,000 of the cute yet disturbing devices pimping Nestle vending machines across the country. It's not just limited to robot-friendly Japan, either, since Lowe's has announced that it's hired a robotic employee to help customers find stock in its San Jose Orchard Supply store. The OSHBot comes with a pair of displays, one to bombard you with offers and another to let you video conference with an in-store expert hiding in the back. That said, it's hard not to be concerned for all of the workers who could be handed a pink slip in favor of the Terminator's doe-eyed cousin.

In this article: Japan, Lowes, Nestle, Orchard Supply, OSHBot, Pepper, Robots, Softbank
All products recommended by Engadget are selected by our editorial team, independent of our parent company. Some of our stories include affiliate links. If you buy something through one of these links, we may earn an affiliate commission.