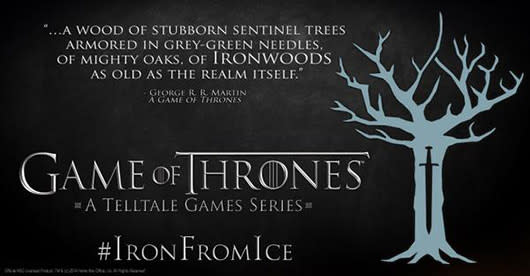 "In Game of Thrones we're taking that multi-protagonist design even further with five playable characters from the same family whose choices affect everyone in the family, and that adds a whole new layer to things that we're really excited about," Allison stated. He makes no mention of which family that might be, nor does he name any of the five playable characters, but Allison's comment still stands as one of the more comprehensive details we've learned of the game to date.

Despite this dearth of information on Telltale's adaptation, Allison reiterates recent claims that Game of Thrones (and Borderlands spin-off Tales from the Borderlands) will be released by the end of the year. "We are on track to launch both premiere episodes of Tales from the Borderlands and Game of Thrones before the end of [2014], so stay tuned."
[Image: Telltale Games]
In this article: game-of-thrones, game-of-thrones-a-telltale-games-series, steve-allison, Telltale, TellTale-Games
All products recommended by Engadget are selected by our editorial team, independent of our parent company. Some of our stories include affiliate links. If you buy something through one of these links, we may earn an affiliate commission.