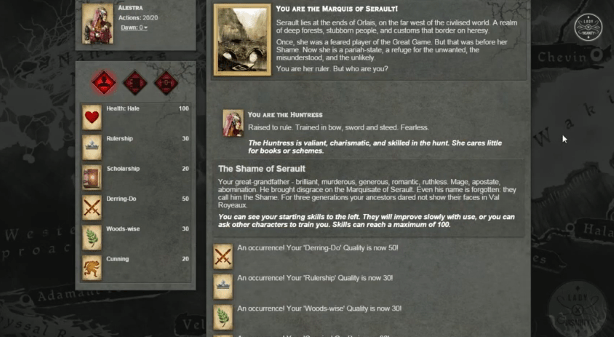 Failbetter Games, the studio behind Sunless Sea and a virtual cornucopia of text adventure games, has partnered with BioWare to create The Last Court: a text-based game that promotes you to ruler of Serault, a small township located within the nation of Orlais.

As the marquis, you'll need to manage threats both physical and fiscal, forging alliances and interacting with major characters from Dragon Age: Origins and Dragon Age 2. Players will be able to choose the Huntress or Scholar archetype for their character, giving themselves a boost to physical or mental stats, respectively. If you're not too keen on playing the medieval fantasy version of Parks and Recreation, here's some added incentive: The Last Court will connect the events of Dragon Age 2 to the forming of The Inquisition, the driving force behind Dragon Age: Inquisition.

Failbetter did not announce precisely when The Last Court would go live, but when it does, you'll be able to access it via the Dragon Age Keep - a website where you can sync and customize your personal saga through BioWare's universe. A first-look video is available after the break.

[Image: Failbetter Games]
In this article: bioware, dragon-age, dragon-age-2, dragon-age-3, dragon-age-inquisition, dragon-age-origins, ea, electronic-arts, failbetter-games, pc, the-last-court
All products recommended by Engadget are selected by our editorial team, independent of our parent company. Some of our stories include affiliate links. If you buy something through one of these links, we may earn an affiliate commission.