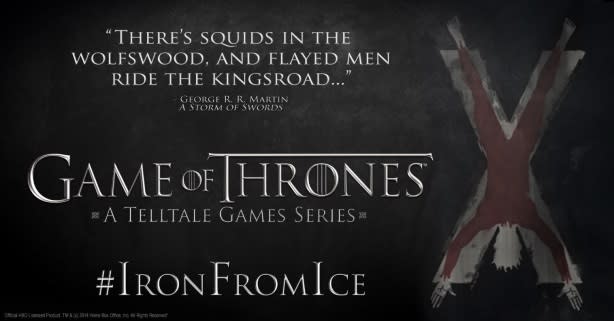 Telltale Games has tweeted another teaser for Game of Thrones: A Telltale Game Series, its upcoming video game adaptation of George R.R. Martin's "A Song of Ice and Fire" novels. "There's squids in the Wolfswood, and flayed men ride the Kingsroad," reads the newest promo image, which prominently features a flayed man. The flayed man is the sigil of House Bolton, a family with long and complicated ties to House Stark.

Meanwhile, the squids referenced by the text seem to point to House Greyjoy, enemies of House Bolton and House Stark - though honestly, in George R.R. Martin's universe, simplifying anyone's relationship down to "enemy" or "ally" never really seems accurate, as there's far too many schemes, plots and backstabbings to know who's really on whose side. The Greyjoy sigil is a kraken; a giant squid-like creature.

Piecing together all of the above clues, it seems that Game of Thrones will take place in Westeros' northern lands. Or maybe not! We know there are a lot of Game of Thrones fans here in the Joystiq reader community, so why not let us know what you think this teaser implies in the comments?
[Image: Telltale Games]
In this article: game-of-thrones, game-of-thrones-a-telltale-games-series, microsoft, pc, playstation, ps3, telltale-games, xbox
All products recommended by Engadget are selected by our editorial team, independent of our parent company. Some of our stories include affiliate links. If you buy something through one of these links, we may earn an affiliate commission.