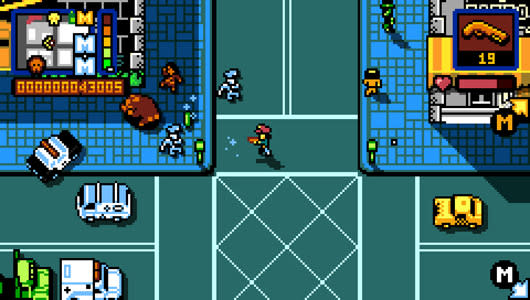 Retro City Rampage DX boasts a number of improvements over the original 2012 game, including a new HUD, an overhauled weapon-selection system, zoom options, tighter controls, and new graphics modes. The PlayStation Store release supports Cross-Save functionality across all three platforms, and includes a new trophy set as an upgrade incentive.

"For DX, every single mission's been re-tuned," developer Provinciano adds. "Vehicles. Weapons. Challenges. Visual Effects. Visual Enhancements. Checkpoints. Difficulty. Challenges. From the game's core to sprinkles on top, such as parking garages and waypoints, it's more than just a new coat of paint."

While Retro City Rampage will be delisted from digital services following next week's launch, the original version of the game will be included as a bonus extra in DX. Retro City Rampage DX will debut first on PlayStation consoles on November 11 for $9.99, and all other platforms will follow in the days afterward.

[Image: VBlank Entertainment]
In this article: cross-buy, cross-save, playstation, playstation-vita, ps3, ps4, retro-city-rampage, retro-city-rampage-dx, vblank-entertainment, vita
All products recommended by Engadget are selected by our editorial team, independent of our parent company. Some of our stories include affiliate links. If you buy something through one of these links, we may earn an affiliate commission.