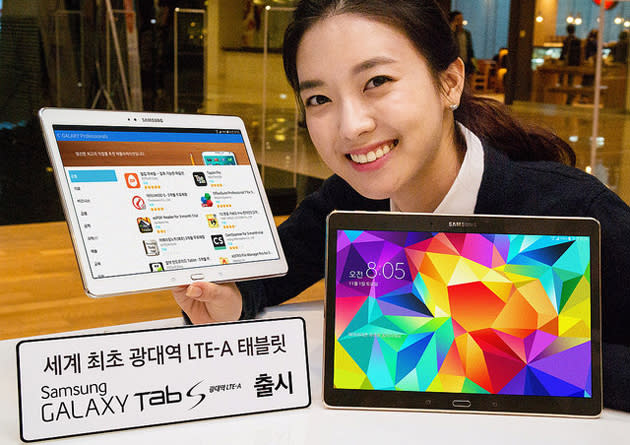 Samsung isn't saving extra-quick mobile data for its smartphones. The company has unveiled a version of the Galaxy Tab S 10.5 with 225Mbps LTE-Advanced inside, giving the tablet a very fast connection while away from WiFi. It's enough to grab 421 songs in a single minute, if you believe the official estimates. It's otherwise the same Android slate you've seen before, although that's not a bad thing given the slim profile and super-vivid display. The catch? You'll likely have to move to get one. Samsung has only announced the upgraded Tab S for South Korea, where it will cost 799,700 won ($743). Given that other countries haven't hopped on the LTE-A bandwagon yet, you could be waiting a while before this device (or more likely, one of its sequels) comes your way.

In this article: android, galaxytabs, korea, lte-a, lte-advanced, samsung, southkorea, tablet
All products recommended by Engadget are selected by our editorial team, independent of our parent company. Some of our stories include affiliate links. If you buy something through one of these links, we may earn an affiliate commission.