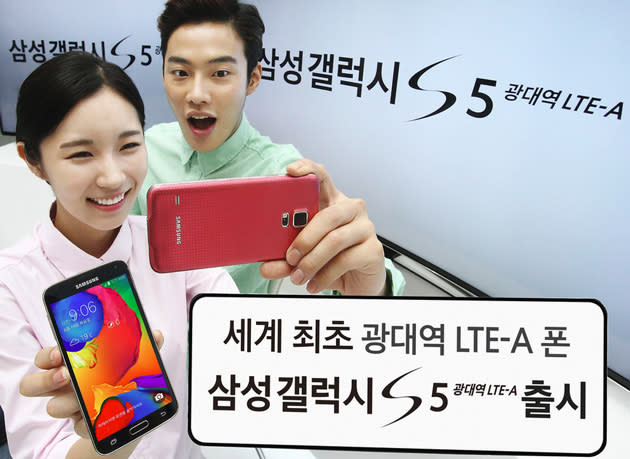 Samsung has just announced a special variant of the Galaxy S5 for its home market. The phone -- simply dubbed Galaxy S5 LTE-A -- plays host to the manufacturer's first 2,560 x 1,440 display, which produces an even higher pixel density than the LG G3 (577 vs. 538 ppi) due to the use of a slightly smaller 5.1-inch panel. We're also seeing the first appearance of Qualcomm's Snapdragon 805 chipset (rather than an in-house Exynos processor), which is accompanied by 3GB of RAM and is built to handle 4K video playback and faster graphics in general. This chip supports LTE-Advanced too, which will apparently deliver data speeds of up to 225Mb/s to stunned, jaw-dropped customers on South Korean networks. Meanwhile, there's no word on whether this variant is headed to the West, or whether it's the fabled Galaxy S5 Prime that has been rumored for so long. But even if this is a Korea-only product, it can still be seen as a test-run for the global release of the impending Galaxy Note 4, which will almost certainly pack many of the same specs and components.

In this article: galaxy s5, galaxys5lte-a, lte-a, lteadvanced, mobilepostcross, prime, qhd, s5, snapdragon 805
All products recommended by Engadget are selected by our editorial team, independent of our parent company. Some of our stories include affiliate links. If you buy something through one of these links, we may earn an affiliate commission.