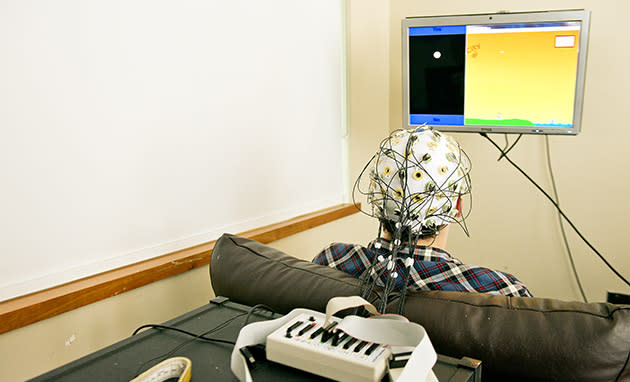 A group of University of Washington researchers showed a year ago that brain-to-brain interfacing is possible in real life. Now, they're back after conducting a more thorough experiment, proving that their initial success wasn't a fluke. This time, the team performed tests using not just one pair, but six people divided into three pairs: one receiver and one transmitter. Just like before, the transmitters are hooked to an EEG machine (above) that can read brain waves, while sitting in front of a computer game. They need to defend a city in the game by firing cannons, but they cannot interact with it directly -- they can only transmit thoughts via the internet to their partners seated somewhere across the campus.

Their partners, the receivers, wear a swimming cap with a coil placed atop the part of their heads where the brain controls hand movements. They can't see the game themselves, but theirs fingers are poised on top of a touchpad that controls the cannons. The researchers found that the receivers act within a split second of the transmitters sending a signal, though the teams' accuracy varied between 25 and 83 percent. Apparently, whenever the receivers failed to launch cannons, it's mostly the transmitters' fault for not executing the accurate thought that triggers response in their partners.

That said, the team has secured $1 million in fresh funding and plans to conduct tougher experiments, involving the transmission of more complicated thoughts and ideas between two people. They're also looking into finding a way for pairs to influence each other's alertness (something that could be very useful to two co-pilots, for instance), as well as to directly transfer knowledge from one brain to another. "Imagine someone who's a brilliant scientist but not a brilliant teacher," said one of the researchers, Chantel Prat. "Complex knowledge is hard to explain -- we're limited by language." Since we're likely far from being able to funnel knowledge between brains, you'll have to pore over the researchers' paper in PLOS One yourself, if you want to know more.

In this article: brain, experiment, thoughts, UniversityOfWashington
All products recommended by Engadget are selected by our editorial team, independent of our parent company. Some of our stories include affiliate links. If you buy something through one of these links, we may earn an affiliate commission.