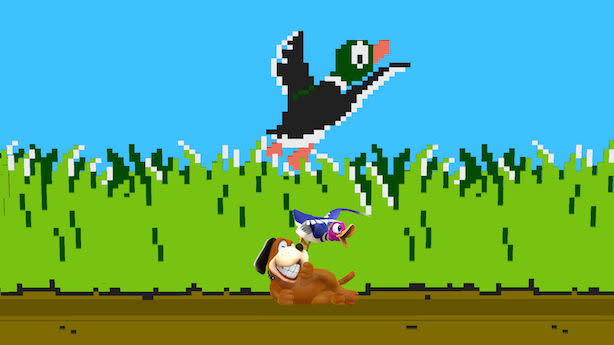 Too-serious protagonists surrounded by stoic fighters have a time and place, but slogging through stern-faced casts can make everything seem a bit dull. For a medium thriving on fantasy worlds, the capacity for goofiness can feel pretty neglected at times. In a way, that makes the outlandish exceptions stand out more easily, and while they might not always be the lead, they still deserve some recognition.

As carefree as Super Smash Bros. for 3DS and Wii U is, the presence of Duck Hunt is the cherry on top of the brawler's roster for me. The series is no stranger to left-field appearances, but I was surprised how quickly it could convert me to Huge Fan status for a dog that's literally pointed and laughed at my ineptitude for decades. Fending off approaches with clay skeet shooting disks and the trick shot can from Hogan's Alley just seals the deal for me – Duck Hunt conquered Villager and Toon Link as my favorite Smash Bros. roster apperance, hands down.