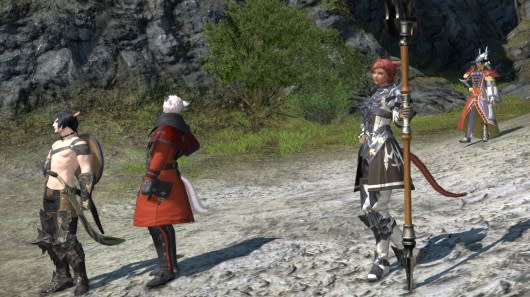 You've been enjoying your time playing Final Fantasy XIV, which is good. You hadn't expected to, but you have, and that's even better. But it does make your hastily considered name of "Ffxiv Blows" a bit less than appropriate. Or perhaps you've just grown tired of your in-game avatar's appellation, whether it's a setting-appropriate name like M'lana Nyokha or a less-setting-appropriate name like Mycat Isanimrod. You don't have to suffer a poor name any longer, though, as the rename feature has arrived.

Character renames can now be purchased through the game's account management page per character, allowing you to type in a new character name when you're logging in much like the appearance-changing aspects of Fantasia. The cost for a single rename is $10, and they are purchased per character rather than account-wide. So if you've long been looking to alter your character's less-than-dignified sobriquet, you can do that now.
In this article: account-service, character-names, character-rename, character-service, console, consoles, fantasy, ff, ff14, ffxiv, final-fantasy, final-fantasy-14, final-fantasy-xiv, name, names, news, news-items, rename, square, square-enix
All products recommended by Engadget are selected by our editorial team, independent of our parent company. Some of our stories include affiliate links. If you buy something through one of these links, we may earn an affiliate commission.