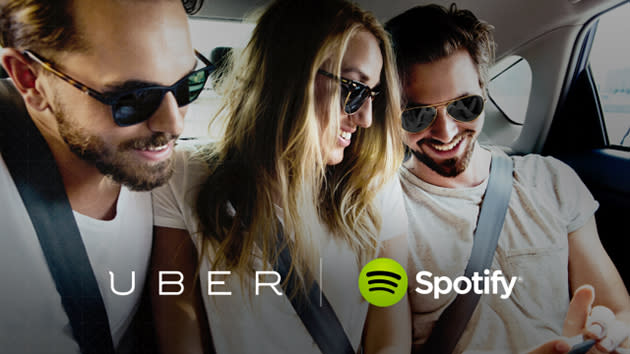 Reports surfaced last week that Uber riders would soon be able to blast tunes from Spotify during the commute, and now the partnership is official. After hailing a car via the handy app, you can decide what music you're in the mood for, and when the car arrives to pick you up, it'll already be playing inside. You'll need to connect that paid streaming account inside Uber's mobile software to opt in, but doing so not only sets the music beforehand, but allows you to control it for the duration of the trip. The collaborative effort is set to launch on November 21st in London, Los Angeles, Mexico City, Nashville, New York, San Francisco, Singapore, Stockholm, Toronto and Sydney with a widespread rollout in the weeks that follow. Of course, the driver will need to connect their phone to the car's stereo for you to take advantage, but Uber says those folks are excited about sorting your playlists. If the car you hail chooses not to play music, the option to play Spotify won't show up in the Uber app.

In this article: music, musicstreaming, spotify, streaming, uber, video
All products recommended by Engadget are selected by our editorial team, independent of our parent company. Some of our stories include affiliate links. If you buy something through one of these links, we may earn an affiliate commission.